Hawkwind Bio – All you need to know

Hawkwind were formed in 1969, originally as Hawkwind ZOO, by former London busker DAVE BROCK. Although there have been many line-up changes over the years, he remains at the helm today and is known affectionately by many fans as The Captain of the Ship.

In 1970 the band appeared outside the perimeter fence of the Isle of Wight Festival as a protest to the admission charge.

JIMI HENDRIX was spotted in the audience. That same year, they played at the first Glastonbury Festival. These activities helped establish Hawkwind as the people’s band, alongside being widely acknowledged as the creators of a new genre of music – space-rock. Later that year, the band’s first single, HURRY ON SUNDOWN, was released, followed by their debut self-titled album, which remains a steady seller almost 47 years later. 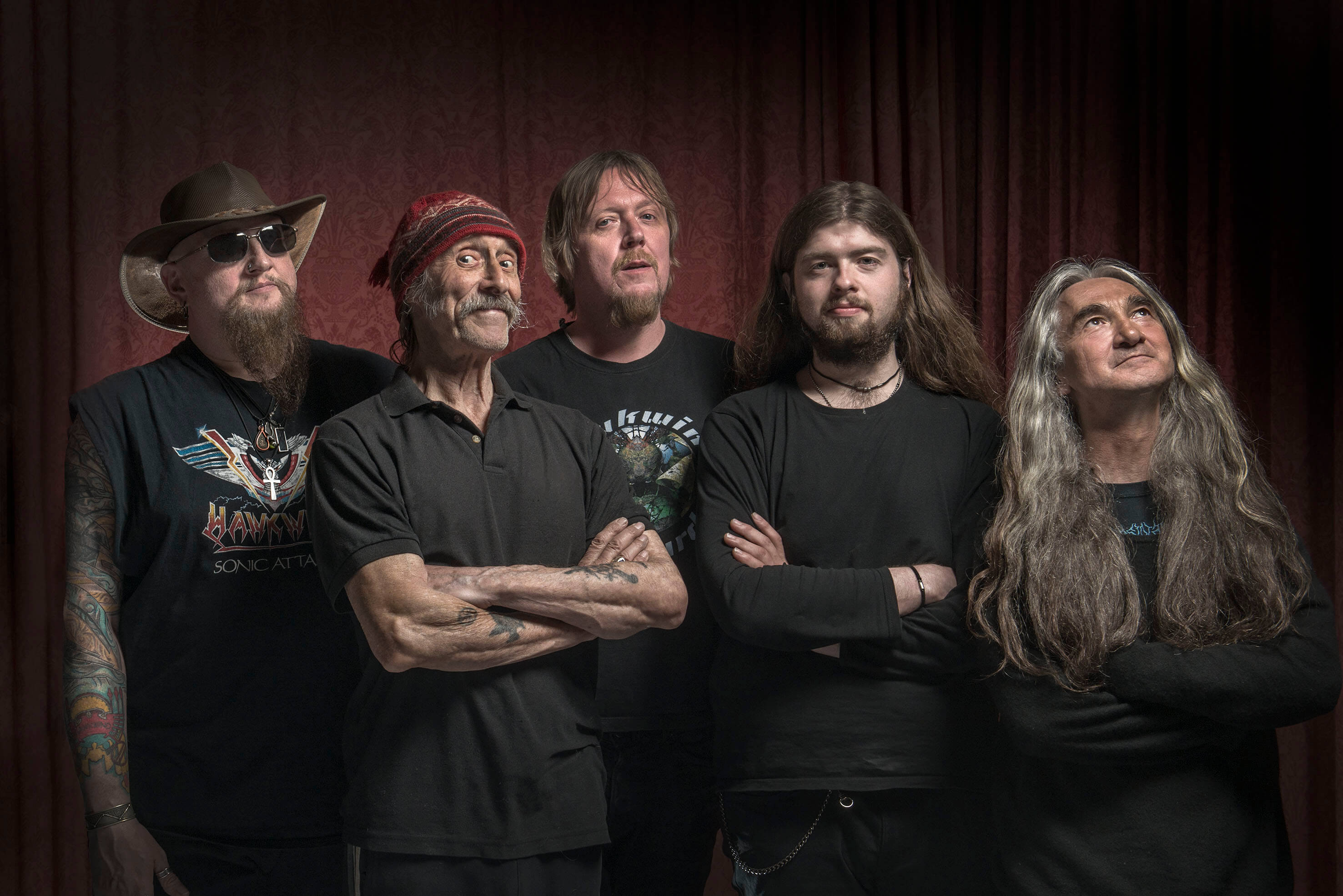 By 1972 the band’s popularity had grown to such an extent that they were able to headline such iconic venues as the Chalk Farm Roundhouse in London. A gig billed as the GREASY TRUCKERS PARTY at the venue in February that year was to be forever etched into HAWKWIND folklore, as it was at this show that their trademark single SILVER MACHINE was recorded. The track, featuring LEMMY on vocals, brought the band to the attention of the wider general public after it reached #2 in the UK Single charts in June.

The success of SILVER MACHINE financed their famous mind-blowing themed tour entitled SPACE RITUAL. This tour set the precedent for all future Hawkwind shows. The band’s wealth of creative talent, including contributions from the likes of sci-fi author MICHAEL MOORCOCK, poet and visionary BOB CALVERT, designer BARNEY BUBBLES and lighting engineer LIQUID LEN, created the world’s first truly multi-media touring roadshow. The barrage of light, sound, dance and theatrics has since become a hallmark of all subsequent Hawkwind shows, making each gig a unique and spectacular event.

In 1973, the classically trained musician SIMON HOUSE joined the band on electronic violin, and throughout the subsequent two decades, MICHAEL MOORCOCK often wrote lyrics for the band, as well as recording and appearing live with them. After an unfortunate drugs bust in 1975, LEMMY left the band and went on to form MOTORHEAD.

In 1979 DAVE BROCK, together with HUW LLOYD-LANGTON on lead guitar, SIMON KING on drums, HARVEY BAINBRIDGE on bass and former GONG keyboard player TIM BLAKE, recorded the LIVE 79 album, which entered the Top Ten of the UK album chart. The following year, GINGER BAKER replaced Simon King on drums, and together they recorded the classic LEVITATION album, which also went Top Ten.

In 1985 the band performed the ambitious CHRONICLE OF THE BLACK SWORD album as a spectacular live show inspired by MICHAEL MOORCOCK’s epic sage ELRIC OF MELNIBONE; and the following year, the band headlined READING FEASTIVAL, with LEMMY turning up to make a guest appearance. The performance was transmitted live on BBC Radio 1 and was later released as the FRIDAY ROCK SHOW SESSIONS.

Around this period, Hawkwind began reaching out to a whole new audience of fans and musicians, many of whom embraced much of the Hawkwind sound and ethos whilst adding their own twist. This would see the start of a whole new dance movement and rave culture towards the end of the decade, with acts such as THE ORB, FUTURE SOUND OF LONDON and, latterly, THE CHEMICAL BROTHERS and LEFTFIELD openly acknowledging Hawkwind’s influence.

Throughout the 1990s further classic albums, including SPACE BANDITS, PALACE SPRINGS, ELECTRIC TEPEE, LOVE IN SPACE and DISTANT HORIZONS, were released on a regular basis.

Throughout their career, Hawkwind have performed at numerous free concerts, most famously the STONEHENGE FESTIVAL, and have supported many and various charities, including SHELTER, GREENPEACE, TRAVELLERS AID TRUST, FREE TIBET CAMPAIGN and SAVE ENDANGERED SPECIES.

In 2001 the band appeared live on CHANNEL 4, toured Australia for the first time, headlined the CANTERBURY FESTIVAL, employed the gust vocals of ARTHUR BROWN, and headlined a week of psychedelic-themed shows at the ROYAL FESTIVAL HALL in LONDON.

Further releases followed in 2002 including YULE RITUAL, recorded live at the LONDON ASTORIA the previous year; the band headlined their own three-day festival in Devon, HAWKFEST, featuring a host of space rock and mainstream bands; and in October played WEMBLEY ARENA as special guests of MOTORHEAD.

In 2005 they released TAKE ME TO YOUR LEADER with assorted guests such as punk songstress LENA LOVICH, the iconic ARTHUR BROWN and, surprisingly, Channel 5 presenter MATTHEW WRIGHT, a long time fan of the band. This was followed in 2006 with the release of the dual format TAKE ME TO YOUR FUTURE, featuring audio on one side and video on the other.

To celebrate 40 years together in 2009, HAWKWIND played a series of packed out UK venues throughout the UK, and a stunning headline set at the BEAUTIFUL DAYS FESTIVAL in Devon.

Since then, and as HAWKWIND rattle headlong towards their 50 years as a band, DAVE BROCK has presented the MOJO HERO AWARD to JOHN LYDON in 2011; Dave himself received the LIFETIME ACHIEVEMENT AWARD at the prestigious PROG ROCK AWARDS in 2013; have released countless further albums; hosted numerous HAWKEASTER, HAWKTOBERFEST and HAWKFEST events; toured regularly throughout the UK and Europe; toured Japan; and in April 2016, released the acclaimed Top 30 album THE MACHINE STOPS.

One day, the machine will stop. It will have to. But for now, it continues to enthral, to delight, to amaze and to inspire new generations to continue reaching for their ambitions.