2000Trees Festival have us so excited with their announce of a further 42 incredible bands to one of our most loved festival weekends.

This years festival takes place between Thursday 9 – Saturday 11 July 2020 and boasts an amazing line up.

The amazing Creeper will be returning to the Gloucestershire fields, in support of their brand new album Sex, Death & The Infinite Void. Their latest singles, Born Cold and Annabelle, are steeped in the bands energized punk and black-hearted theatricality. As the band, Creeper are boldly striding into their new chapter with a widescreen, cinematic scope that merges elements of classic Americana and stylized BritPop into their sound.

“2000trees is my favourite of all the UK festivals.” shares singer Will Gould. “It’s really awkward saying that, because you don’t want to upset the other festivals, but it’s one of the first ones that took a chance on us when we began. We played there in 2015 [on the Cave stage], then played the main stage, then came back and headlined the second stage in 2018. So we’ve had a long history with that festival.”

Gould continues “They help young, small bands to get a start by offering them a platform, so it’s always been my goal to come back. This year, it’s the biggest slot they’ve ever given us, second from top on the main stage. At this stage in our career – with a second album that’s not even out yet – that means a lot. I think the festival aligns with the values and ethics of the band, which is really cool.”

After a crazy 2019 releasing their second top 10 album, headlining Brixton Academy, as well as supporting Muse and Thirty Seconds To Mars. 2020 will find The Amazons playing 2000trees for the first time.

Also added to the bill, Knocked Loose whom have caused a stir in the heavy music world since their debut. Few could have predicted just how huge their follow up would become. One of the most talked about and praised bands both on record and live, the band will also be making their 2000trees debut in 2020.

One of 2019’s breakout bands Hot Milk will make their debut. While Dream State will also appear alongside seasoned acts Joy Formidable, Dinosaur Pile Up, Boston Manor, Get Up Kids and Vukovi

“We’ve been overwhelmed by the early bird ticket sales for 2020 and we’re definitely on the way to a sell-out year. I’m very proud of the line up we’ve put together and I think it shows the usual 2000trees mix of classic bands, new bands breaking big and your-favourite-new-band you are about to discover. So check out the Trees Spotify playlist, grab a ticket and we’ll see you at sunny Upcote Farm in July!” explains 2000Trees booker James Scarlett. 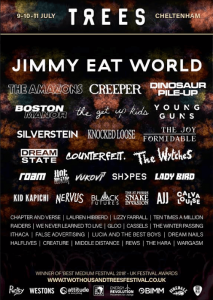 Well we know we can not wait roll on June 2020, if your feeling the same take note: General tickets go on sale this Friday (24 January 2020). You might also make your festival season with 2000Trees draw. The first 1,000 people to buy a ticket on Friday will get entered into a prize draw to win one of the following prizes: 1 of 2 VIP tickets FOR LIFE, 1 of 100 Beers at the festival or 1 of 50 merchandise goody bags. A VIP Ticket to 2000Trees – for life – Whoooo!

The multi-award-winning 2000trees Festival is a 12,000+ capacity music festival set in the rolling Cotswold Hills. You’ll get three nights camping along with a friendly, intimate atmosphere. To perfect this festival further amazing food and locally produced ciders, ales & lagers in widely available.

2000trees Festival is all about the music, with more than 120 of the absolute best new and underground acts from the worlds of rock and indie, plus some more established acts to close out the night. The festival also prides itself on giving new bands a platform to play to a huge audience, helping build bands up and supporting the UK music scene.