The duo has unveiled their first track Destroy Me, which previews their self-titled debut EP which follows on Friday 23 October via Roadrunner Records UK.

Destroy Me fires out of the starting blocks in a ferocious rush of punk rock melody and Gould’s distinctive vocals. His words possess that playfully eloquent set-up and punchline lyrical style that’s a big part of classic albums from the likes of Jawbreaker and Alkaline Trio.

“Destroy Me is a really good introduction that summarises the band, it had the right kind of energy from the offset,” explains Gould. “This band feels like a love letter to a lot of our early influences. It’s a return to our roots in a lot of ways.”

Elsewhere, Salem’s debut EP captures the life-affirming joy of hearing a live band erupt into a blast of wild, barely controlled energy. Not that it’s a one-trick pony. Opening track Fall Out Of Love hurtles into the kind of towering chorus that Gould first made his name with, ‘Throat’ is an ominous, ever-escalating alt-rock slow burner, while the frenetic closer Doomed (For Each Other) sprints for the finish line. And as with all good EPs, when the needle clicks off, the natural thing to do is to flip it over and play it again from the start.

“It was a labour of love for us,” Gould adds. “We’re releasing when a lot of kids are stuck inside, or if they’re not, their life isn’t quite the same. It’s a way to soundtrack this very difficult time. The power of punk rock is that it helps you forget about the monotony of every day. And life has never been as monotonous as it is now.”

There’s a smouldering gothic romance at the heart of all the songs. Yet unlike anything we’ve heard from him before, he uses comically violent imagery as a metaphor for all-encompassing desire. As he summarises, “I’ve been calling them sweet satanic love songs. They’re happy songs about being in love.”

Gould and Reynolds’ roots are both in Southampton’s underground punk scene. Gould has been a fan of Reynolds’ work since his time with Howard’s Alias, who was signed to the renowned Household Name Records in 2004-2005. They’ve remained good friends ever since, with Reynolds working as Creeper’s guitar tech and even co-writing three songs from their Top 5 album Sex, Death & The Infinite Void alongside Gould and the band’s guitarist Ian Miles.

When Gould was plotting the Creeper album – a labyrinthian Rubik’s Cube in which music, narrative and visuals were all indelibly interlinked – he wanted to blow off some steam. So, he called upon his old friend Reynolds to spend a day making music in the way he had done growing up: by rattling through some new songs just for the sheer fun of it, with no pressure and no greater goal in sight.

There was something special about the songs they wrote that day. As the summer of 2019 drew to a close, they decided to capture them at The Ranch with the help of another old friend, producer Neil Kennedy (Creeper, Boston Manor), with Gould contributing vocals, Reynolds on guitar, bass and backing vocals, and Aaron Graham (Drawings) on drums.

The songs went into the virtual vault. And in an ordinary situation, perhaps that’s where they would’ve stayed. Always eager to keep busy, Salem was one of Will’s projects that came to fruition. And when the restrictions of 2020 are eventually just a bad memory, Gould hopes that Salem will play live, with the core duo joined by bassist Ranny Ransom and drummer Aaron Graham.

SALEM’s debut EP is now available to pre-order link here. It will be released on limited edition pink 12” vinyl and digital formats as well as a variety of merch bundles. You can follow Salem via their official website, Facebook page and Twitter from where they tweet as @Church_of_Salem. 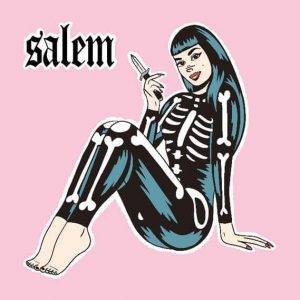