You Me At Six return with the announcement of their eagerly anticipated seventh studio album, SUCKAPUNCH, due for release 15 January via Underdog Records / AWAL.

‘We have been in the pursuit of happiness for quite some time, both collectively and individually, only to discover that happiness is more than just a state of mind. We had to face our pain head-on and carve it into something positive. Our seventh studio album is the result of us finding peace and acceptance of what’s been and gone.’ explains lead vocalist Josh Franceschi.

You Me At Six have also dropped a new single. Following the punk energy and bite of MAKEMEFEELALIVE, the new singe Beautiful Way arrives in a cathartic burst of visceral emotion, accompanied by stunning visuals. Both tracks exemplify the soul-bearing nature of You Me At Six’s explosive and shape-shifting seventh album, SUCKAPUNCH. After a tumultuous period of emotional blows, leaving the majority of the band getting to grips with new life scenarios, the new album is rooted in reflection and redemption and sees You Me At Six harness those darker experiences as a catalyst for creativity, empowerment and positivity.

Recorded over five weeks at Karma Sound studio in Bang Saray, Thailand, the band arrived armed with dozens of songs, loops and ideas, eager to push the experimentation of their 2018 UK Top 6 album VI further. Undoubted heavyweights in the live arena, the summer of 2019 saw You Me At Six play their biggest outdoor headline show to date in front of 15,000 fans at a sold-out Gunnersbury Park. Their most recent UK tour saw 40,000 ticket sales, including three nights at Brixton Academy, selling-out four months in advance in just twenty minutes. May 2021 will see the band celebrate the release of SUCKAPUNCH with a string of underplay shows across the UK, including London’s O2 Kentish Town Forum, with support from Saint Phnx.

You Me At Six 2021 UK Headline Tour dates as follows:

Tickets are on general sale from Friday 2 October with a pre-sale from Wednesday 30 September. ll possible You Me At Six news and information can be found at the band’s official website, Facebook page and Twitter from where they tweet as @youmeatsix. 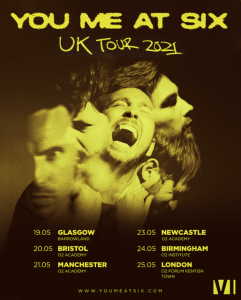