Skip to content
Album Review: Holding Absence – The Greatest Mistake Of My Life

Holding Absence’s eponymous debut album did not just tug at our heartstrings but wrenched them fully from our chests before returning them battered and bruised. A striking emotional experience that blinded you with the band’s potential.

Two years on Holding Absence are releasing, The Greatest Mistake Of My Life, their sophomore album. Have they built on that solid foundation and can they still go messing with our heartstrings?

It was a considered decision to avoid listening to the three singles released in advance of hearing Holding Absence’s second album all at once. There has always been something narrative about the way the tracks flowed on their debut that made not hearing the album in full just once feel like there was a missed layer.

As Beyond Belief, Afterlife and In Circles were released small snippets were heard. Tantalizing morsels of a stirring chorus, an emotive lyric and some magnificent drum rhythms. It was hard not to succumb to their lure.

We enter The Greatest Mistake Of My Life by way of an introduction; delicate piano plays while barely even whispered voices transition into the albums first song. “I’m Alive” exorcises Lucas Woodland as you immediately hit with intensity and melodious undulation, which we have come to expect from the Cardiff based band. There is more of an evolution to their sound and a matured richness to their dynamic.

Tracks flow from one to the other compounding the feeling of passing through a story. Curse Me With Your Kiss delivers context to that tale. The painful curse of lost love is lived in vivid lyrical imagery as the band plays with tempo and tones moving you up and down the scale of heartbreak. If! you feel you’ve heard this narrative before Afterlife is the sucker punch you won’t see coming. An intense vocal performance from Woodland that is gloriously married to a striking use of drums and an anthemic chorus.

Ascending intros, interludes, including spoken word creations, guide us into tracks for the most part blurring any jarring move from those more powerful songs to those that have softer edges. Midway through, often the home of fillers for many albums. Not this time nomoreroses is a passionate infusion of poignant melody with wonderfully brutal post-hardcore elements: again, those drums are exquisite. As with so many of the tracks, it rings true that Holding Absence is a collective of each member’s strengths. Guitarist Scott Carey and bassist Joseph James bring a charming and engaging musicality, which you rarely find in modern heavy music. While drummer Ashley Green is not only one of the most dynamic musicians, you’ll hear play he succeeds in animating his beats to the point where you can hear joy and wretchedness and resolve in them.

When, American Psycho’s, Patrick Bateman monologues about Huey Lewis and The News (among many others) he is not sharing a genuine personal critique of how the music makes him feel. Bateman uses music to fill the missing emotions that his psychotic breaks are creating. Making it just about possible for him to fit into the environment he inhabits. It provides the conformity he craves, the consent to worship consumerism and the ego-syntonic aggression he fantasises about.

Going back to the albums first words “I’m Alive” they, in a way, sum up succinctly what The Greatest Mistake Of My Life highlights; celebrate life and all the emotions that come with it. An album such as this could never play on Bateman’s turntable, he did not need or want an album for every emotion because he did not feel a range of such things. That is what Holding Absence have created an album packed with exhilarating emotions that take you on an intense raw heady journey through love, loss, defeat, pain, survival and does so oh so very beautifully.

Holding Absence – The Greatest Mistake Of My Life is released on Friday 16 April 2021, via Sharptone Records, and is available for pre-order from the usual retailers. Please consider independent record stores for physical purchases. You can stay to date with all Holding Absence news via Facebook and Twitter from where they tweet as @HoldingAbsence. 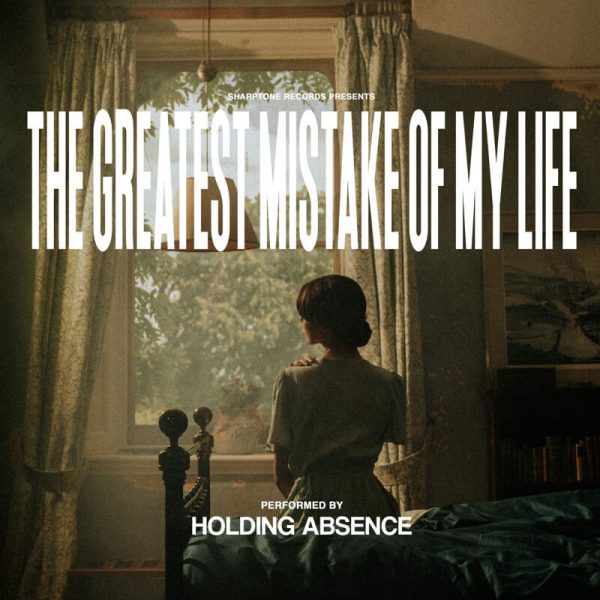