Henry Normal (real name Peter Carroll) has had an incredible career. Starting out in poetry, touring with Pulp and many other new wave acts, and going on to start a TV production company with some of comedies greatest people. We spoke to him about his poetry, his upcoming tour, his life in TV, film and even a run in with the mayor of Bury!

We started off talking about his arrival in Manchester, and setting up Baby Cow; “I arrived in the Eighties, and there wasn’t a lot of organised infrastructure in comedy at the time. There were no city centre comedy clubs, and no city centre poetry clubs. All it was, was a couple of people putting on sporadic gigs. The only comedy club that was regular was a cabaret club over in Ashton, called Stand and Deliver. I went over there and that was where I met Steve Coogan, Johnny Dangerously, Martin Coogan used to do an acoustic set. Lots of people used to come in, like Frank Skinner, and John Cooper Clarke.” He went on to say; “In those days, it was never all comedians on a bill, or all poets, there was always a mix”

I then asked him about touring with Pulp, and what that was like. “I lived in Chesterfield before living in Manchester, and that’s right next to Sheffield, so I used to have a record shop called Planet X Records, so I was very much into music at the time. I also used to help out a place called Gotham City, and we use to have bands there, so I got to know some of them. I got very friendly with Pulp, particularly Russel (Senior), the violinist and guitarist. I did some gigs with them, and some other Sheffield bands.”

We then got onto the meeting of Steve Coogan, and the initial characters he was performing before Alan Partridge. “As I said, I met him in Oldham, but at the time the only character he was doing was Duncan Thickett. He was only 29 when I met him, so well before Partridge, and he was brilliant, his voices were brilliant, but he didn’t do the faces at all” Henry continued “He could do more or less any voice you wanted, so he was brilliant, and he earns a lot of his money doing voice overs back then, whereas the rest of us had got no arse in us trousers. We had great acts there, but they never quite made it onto television. We had people like Bob Dillinger and Kevin Seisay and of course a 19 year old Lemn Sissay, who had just come onto the scene, and has now been made an OBE.”

Henry later worked with Steve Coogan on Alan Partridge, and throughout his 17 years as Managing Director of Baby Cow. The pair also worked together on the film, ’24 Hour Party People’ and Henry had this to say about the film, including a story about Tony Wilson; “That was Michael Winterbottom’s baby. Obviously, he chose to Steve to play the lead part. We all knew Tony Wilson. Funnily enough, I set next to him the first time he saw the film. It was actually a very long film when he first saw it, and his son was with us, it must have been a two hour long film at the time. It had a break in the middle, you know like a very old fashioned film, and a there was a fake tandoori restaurant advert just before you got to the break. We watched it all, and I said to him, ‘Is that how it was Tony?’ and he said, as he has said many times, ‘Don’t let the truth get in the way of a legend’. Henry then went on to tell me about the last time he met Tony Wilson..

“It was at Atlas bar. He asked me to come up and start a film fund, as we had made a few films by then, and he wanted a film fund for emerging Manchester talent. So I went up and had a chat with him, and he talked for a good hour, cause he could always talk. When we got to the end of it, I asked about where the money was coming from, and he replied ‘Henry. You’re so London’ because he was about the art, he was never about the money.

From talking about TV and Film, we got onto Poetry, the Manchester Literature Festival and touring. He is playing dates in Sale, Bury and Wigan in the Autumn, and I asked him why he didn’t choose to do a central Manchester gig. He said. “I’d love to do a city centre gig. The last one I did was with Lemn Sisay, as part of the Manchester International Literature Festival, to mark 25 years since I started it. The original festival was a gig with me and Lemn, with Johnny Dangerously, Kev Fegan and Steven Waling. We did a gig at the Cornerhouse, and I said ‘I’m gonna start a festival, I’m just letting everyone know’.  I got Rick Michael to do the promotion of it, we put posters up like a rock gig, and put on 10 days of events. I used the money I had got from when I did Packet Of Three” At the time, Henry didn’t rate himself as a performer, so decided he would just write material, and he put £3,000 into the festival to start it out, despite not owning a house at the time.

John Cooper Clarke has performed at the festival, and when I asked him about that, he told me stories of being John’s driver, and gigging with him; “I was a big fan of John Cooper Clarke. I gigged with him several times back in the day, in the late 80’s and early 90’s when I was in Manchester. I remember going round to his house, and he lived, as you would expect, next to a graveyard. I went round at 3pm to pick him to drive him over to Newark, and he was still in bed. So he got up and had an Egg Custard for his breakfast, at 3pm!” He continued “When we got to Newark, he got on stage, and he was absolutely brilliant”

Whilst discussing his upcoming tour (dates at the bottom of the article), Henry told me of the time his book was nearly banned in Bury. “I did a gig back in the late 80’s, as my book was going to be in all the libraries, which was an honour for me. So I did this gig, and the Lord and Lady Mayor of Bury were there, and Councillor Bigg was there, and I was doing my stuff, and I swore. They didn’t like that. The Lady Mayor walked out, and the Lord Mayor was writing down every swear word that I said. The next day, it was in the papers that Councillor Bigg was trying to ban me from Bury. Of course they couldn’t, because it wasn’t as if Libraries didn’t have books with swearing in them already, they had Lady Chatterley’s Lover.”

Now, is an interview in 2021 complete without a discussion about life during Lockdown, which for Henry, was different to a lot of people, due to him and his wife being full time carer’s for their son, who has autism. In lockdown, Henry managed to write two poetry books, one of which he had started before we went into lockdown, so he had time to finish that, as well as write another. Both of these books, as well of the best of he released pre-covid but never got to tour, are now available, and material from them will be performed on his upcoming tour. Henry has also done some radio work throughout lockdown for BBC Radio 4, and each episode is available on BBC Sounds. I asked him about his son’s life through lockdown, “He paints everyday, and he enjoys painting. If we burnt all his paintings, he wouldn’t be arsed, he’d just paint some more. So it’s not like he’s precious about them, he just enjoys the process of doing it. It’s actually taught me to just enjoy creating, rather than thinking about what I’m going to do with something. It taught me to just enjoy being in the moment and enjoy doing it.”

“Logic can get you from A to B, but imagination can take you anywhere” – Einstein

Favourite comically – “She’s a fan of the man with a tan from a can, The bronze adonis got her” – Bronze Adonis

Henry Normal’s ‘Escape Plan’ is going on tour from 1st October 2021, including 3 Greater Manchester dates. His radio shows are available on BBC Sounds and to keep up to date with his work, and the work of his son, head over to Instagram and Facebook! 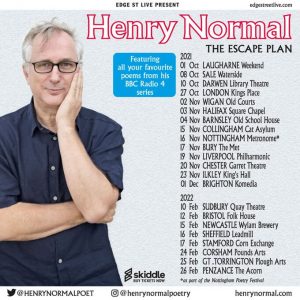