A typical winters evening in Manchester. The markets were buzzing on one side of town, and on the other, the AO Arena was packed to the rafters so the city could welcome home two of its finest bands. Opening the night were one of the most iconic bands from the Madchester era, Happy Mondays.

Whilst the arena wasn’t yet full, there was a strong buzz echoing around the venue as Sean, Bez, Rowetta and co took to the stage and smashed through a solid set of their biggest and best tunes. ‘Kink Afro’ was the curtain raiser, and the rest of their set (about an hour long or so) was made up of their big hitters, with ‘Step On’, ’24 Hour Party People’ and ‘Hallelujah’ all making their way into the set list and down the ear canals of the adoring crowd. Throughout the set, there was a jovial atmosphere raining from the stage, as Bez and Sean joked with each other, usually with Bez as the punchline.

A short wait was all that was stopping James from being united with their incredible crowd, and the wait quickly finished, the music stopped and the stage fell into a smoky, hazy darkness, before being relit as the 9 piece band filled the enormous stage. Tim Booth was the last to take his place in the centre, and the reception he got as he gripped his mic was one of the most welcoming receptions I have heard at a gig for a long while. James are everything you need in a Manchester band, their material is happy and gloomy, all at the same time, and if that isn’t the perfect metaphor for Manchester, then I’m not sure what is. 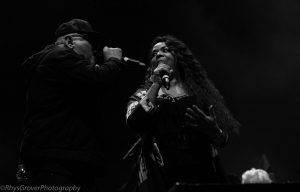 ‘Zero’ kicked their set off, with ‘Isabella’ following it, and something took me by surprise, with this being my first James headline gig. The crowd knew the words to every track. I was expecting big choruses and huge singalongs for their mighty hits, but straight from the go, the fans were swaying and singing along, hanging off every note laid down by the band. Starting on such a high, it was going to be a challenge to keep the atmosphere at that rate, but their setlist was everything a fan could hope for. The old and the new intertwined, allowing very little time for anything to slow down.

It’s not as if there were mosh pits and crowd surfing, because it’s really not that sort of gig, however the atmosphere really was contagious. Not only was there a sense of welcoming hailing from the mighty stage, but the crowd were throwing every ounce of love and adoration back in the direction of the band. When ‘She’s A Star’ took the place of third track of the night, there was a buzz around the venue that only happens on super rare occasions, it’s reserved for some of the all time greats, and that is exactly what James are. Not just in Manchester, but their musical impact has influenced and changed lives for everyone who has come across the band.

James are currently on tour to support their latest album ‘All The Colours Of You’, and the tour wraps up in London on Saturday night, after a good few weeks out on the road.