Skip to content
Live: Nothing But Thieves In Manchester

A Triumphant Return To Manchester

Last night, Manchester’s O2 Victoria Warehouse played host to the first of two nights for Nothing But Thieves to bring their ‘Moral Panic’ tour to the incredible city. They had brought along Airways and Yonaka to support them, and having such an incredible trio of bands was a sight you rarely get to see.

I got to the venue as Airways were playing their final tracks, and already the venue was alive with energy. There were a fair portion of the crowd donning Airwaves merch, so it’s clear that this band are going on to bigger things, and supporting Nothing But Thieves is going to be a superb stepping stone for them. I wish I had managed to get to the venue slightly early to catch more of their set, but hopefully I’ll catch them around again soon. It was a short wait between the end of their set and the beginning of Yonaka’s, and I was blown away right from the off. 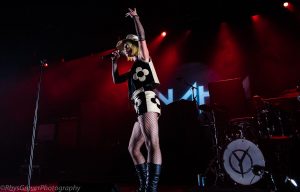 I first caught Yonaka at Neighbourhood Weekender 2019 (the same time I first saw Nothing But Thieves too) and back then, Theresa Jarvis was sporting blonde hair and was dressed in jeans and a t-shirt. A change in direction for the band and a boost of energy has now lead to her dying her hair glow-in-the-dark green, and now sports a more gothic look. She’s upped her swagger and stage presence too, and was in control of the crowd from the off, right up until the end of their set. The rest of the band remain much the same as I last saw them, still with energy levels so high that even watching them makes me think, ‘If I tried that, I’d end up in hospital’. The heavier sounding set allows the entire band to really let loose and deliver something truly mesmerising to watch. The crowd reaction was insane too, and it felt that the gig was as much for Yonaka as it was for Nothing But Thieves.

This tour is in support of the album ‘Moral Panic’ which the band released last year, and it’s been such a long wait that since then, the band have also released an EP of fresh material, titled ‘Moral Panic II’ and it was a track from the EP, and lead single ‘Futureproof’ which Nothing But Thieves chose to open their fierce set with. With it being the lead single, it’s the track which the crowd will undoubtedly know the best from that EP, and straight from the off, I could feel the crowd bouncing away behind me. Fans were treated to a spectacular light show from the off too, with strobes, lasers and everything in between thrown in for good measure. It wasn’t the easiest shoot, but it was incredible to watch after I had finished shooting.

Proceedings were slowed down with the second track, and the stage was drenched in heavy blue light for ‘Real Love Song’. I didn’t have much time to check behind me, but I can imagine that there was a sea of phone torches as the crowd belted out the lyrics to this relaxed number. I say relaxed, and in terms of Nothing But Thieves, this track is relaxed, but they always have that incredible, in your face energy with every one of their tracks. They followed this with a track from their 2017 album, ‘Broken Machine‘ with the fantastic ‘I Was Just A Kid’. 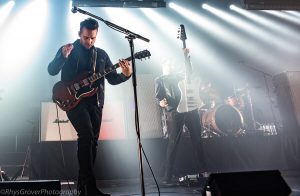 A fourth track in a set is pretty early for a band to bring out one of their biggest tracks, but big tracks are something these guys have in abundance, so they can afford to slip one in early on. I am speaking about the fantastically lively ‘Trip Switch’. It sums up everything the band are about. Loud. Punchy. Massive chorus. Those boxes were firmly ticked throughout the night, and especially for this track.

From here, the Essex quintet stormed through their set, taking the occasional moment to hype up the already lively crowd between tracks, but other than that, they really meant business, and steamrolled through each track with complete finesse. It’s hard to pinpoint the band to one genre, but if we call them heavy rock/heavy indie, then they are masters of their craft and up there with the best around. With every track comes a colossal chorus, and there’s usually a mesmerising solo from one fo the two guitarists too. Mix that in with the incredible falsetto of Connor and you have something truly special.

Tracks such as ‘Live Like Animals’, ‘Miracle Baby’ and ‘Graveyard Whistling’ found their way into the lengthy set, and received a great welcome when they did, but it was tracks such as ‘Forever and Ever More’, ‘Particles’ (despite being the stripped back version), and ‘Amsterdam’ where energy levels not only peaked, but would have shattered the energy-o-meter if such a thing existed. ‘Amsterdam’ was especially high energy, as it was the track the band used to walk off stage, before coming back for a two track encore, which was made up of ‘I’m Not Made By Design’ and ‘Impossible’.

I have been a fan off this band from a distance for a while, but after last night, I can safely say that the distance has been closed up and I intend to follow the band’s every move with new music and hope for a 10 year anniversary tour at some point next year.