Don Broco returned to Manchester for the first of two sell-out nights at Manchester Academy. The venue is full of die-hard fans, all eager to reignite the explosive cocktail Don Broco release in their live shows.

As the first support act Kid Brunswick takes to the stage, the venue is completely enveloped in a thick smoke, not so much a moody aesthetic atmosphere, more like a foggy night on the coast, a real peasouper. There is no denying it’s a difficult ask opening alone on the stage, using backing tracks the energetic bouncing and constant communication with the audience seemed a little stretched to say the least. Bieberesque in looks trying to combine rap, hip-hop, post punk rock, it all feels a little safe.

I have never heard of the main support Noisey, so I was unsure of what to expect, once again another what you would call hybrid band. The band fronted by Cody Mathews, a man on a mission, his dress sense could see him step into the Indie seen, dark blue kagool, Liam Gallagher and Ian Brown come to mind. I don’t think you can pigeon hole the band musically, it’s a very eclectic range. Tastes of grime, hip-hop, they live up to the name ‘Noisey’. They have a power and a presence that draws you in, tones of grunge, waves of post punk delivered compellingly. They had the crowd on their side, I am sure we will be seeing and hearing a lot more from them in the future. 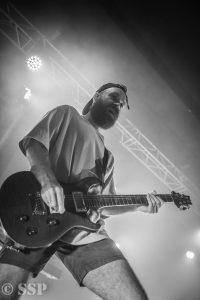 Once again as we fight through the fog, our hosts for the evening Don Broco, bound onto stage and straight into “Manchester Super Reds No1 Fan”, instantly lighting up the stage a backdrop of lazers and harsh coloured lighting beaming across the foggy abyss. It’s hard to keep tabs on what’s happening on the stage, the amount of movement and interaction with each other on stage is difficult to keep up with.

Are they rock/pop? Are they Pop/rock? Who knows. They are a band who clearly love to perform, adored by an army of fans who are trying to keep up the pace of the band, may I say they gave it their all. “Automatic” was received well as the crowd sang a boisterous version of happy birthday to Simon. 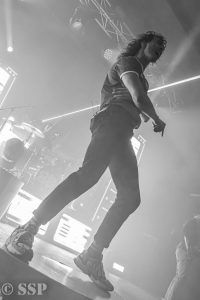 Ushering on to stage “Kid Brunswick” and Noisey”, to participate in the track “Action”, the bands and crowd were having an absolute ball, everyone was in their element, if you have never participated in a Don Broco gig, it’s a riot, everything you would wish as a band so sharp and tight nit a band who are all show men, a front man who loves to communicate with the crowd, the new album “Automatic”, is aired in full throughout the night and its clear they have delivered another superb crowd pleaser.

Finishing the initial set with “Bruce Willis”, the band quickly return for a three-song encore, “Endorphins”, “Everybody”, and finally “T-Shirt song” complete an evening of pure co-ordinated mayhem, in the city that split the atom, Don Broco are a mighty atom of their own, as the crowds head home and the band get on the tour bus, a well deserved rest and recuperation, before doing it all again tomorrow.