Skip to content
Live: The Reytons At Manchester Academy 2

The Reytons Brought Their Debut Album To Manchester

The band are touring to support their debut album, due 12th November

The Reytons have been on the radar of indie fans across the UK for some time now, and with numerous successful EP’s under their belt, the band are now set to release their debut album, ‘Kids Off The Estate’. Originally due for release in September, supply issues have pushed back the release to 12th November, but the tour was already in place, and the Yorkshiremen didn’t let anything stop them last night in Manchester, as they delivered the old and new to their adoring fans.

The Luka State were given the task of opening the night, not an easy feat by any means, but one that they pulled off well. The crowd were firmly on their side within a track or two of their set, and chants of ‘Here we, here we, here we fucking go’ made a surprisingly early appearance for the night. The rowdy crowd were raring to go by the time Corella came to the stage, and it was down to them to keep pushing the energy levels in the room.

They managed to push the energy to tipping point, and the entire venue was bouncing. Not something you often see for support acts, but Corella deserve every ounce of support they get, especially if they deliver sets like that each time they take to the stage. At the end of the set, it was decided that frontman Joel would become one with the crowd, taking his guitar with him and taking a slice of the action with him into the dressing room as they wrapped up a fantastic set. 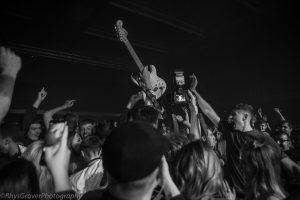 After their walk on track fired through the speakers, and the lights flashed red as the stage filled with smoke, The Reytons took their places, raring to power into their set. They opened with ‘Red Smoke’, one of their biggest tracks which featured on the band’s last EP. The track doesn’t make its way onto their debut album, but it will always hold a special place in the hearts of Reytons fans. Following up with ‘On The Back Burner’, a lively number from a bit earlier in their career. Stood in the photo pit, I could feel the crowd behind me bouncing away with incredible amounts of energy. Arms were flailing in the direction of frontman Johnny, and the band were playing off the back of the energy incredibly well. With this genre of music, the crowd are always lively and rowdy, but this night was something special.

‘Headache’ and ‘Expectations Of A Fool’ followed, and even four songs in, nobody showed any signs of slowing down. It’s nights like these which everyone longed for over the pandemic, and I think for a lot of the crowd, this may have been their first gig back, and it had been a longtime in waiting too. I think this helped to contribute to vibe of the night, the crowd were letting loose after months of crap, and the band were incredibly glad to be back on stage doing what they do best. 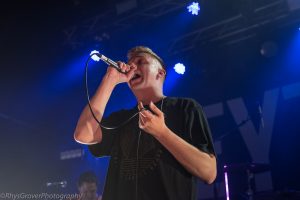 The rest of the set was made up of their big hitters, some tracks off the upcoming album, and tracks from their earlier EP’s. The Reytons haven’t been around for all that long, but being able to deliver a lengthy set packed with tracks that everyone knows the words too says everything you need to know about where this band are heading. Getting to see them play at Academy 2 feels like it may turn into one of those ‘I was there’ moments for everyone who attended.

The lads show no sign of slowing down, and with their debut album release just a couple of weeks away, I can honestly only see this band going from strength to strength and conquering the genre.