Skip to content
Live: The Streets Return To Manchester!

Mike Skinner returns to Manchester with The Streets for a riotous evening of music and education.

Is it really 20 years since Mike Skinner introduced us to “Original Pirate Material”? Oh, how the time has flown by, tonight for me is a poignant one, a personal journey and a homage to the person who introduced me, educated me about The Streets.

Music has always been a backbone to my life, staying loyal to artists I grew up with, finding new artists that excited me and kept my love of music flowing, I was introduced to tonight’s host right from the outset of their journey. That introduction heralded the coming of age and expansion of their musical journey.

As I enter the Castlefield Bowl for this instalment of Sounds of the City, a sense of apprehension lingers on my behalf. First up are The Skinner Brothers, no nonsense let you have it band, with stories about football culture, drugs, drink, sex, and love – the Skinners have so many elements of the classic riotous, rebellion-tinged British band that every few years comes along and shakes things up, no matter where we are in culture at the time. Next year will see them support Kasabian on their long-awaited return.

Next to enter the stage are Children of Zeus a soul project of Manchester artists Konny Kon & Tyler Daley. Konny Kon is a DJ, MC and beatmaker best known as one third of Broke’n’English alongside fellow Mancunians DRS and Strategy. Tyler Daley, also known as Hoodman went from being a respected MC and actor to one of the most in demand soul singers of recent times, lending his vocals and writing credits to music from Soul II Soul’s Caron Wheeler, 50 Cent, Lisa Mafia, Bugsy Malone and more. This not the first time they have graced the stage at the Bowl, they will be heading out on tour throughout October, do yourselves a favour and head out to support them you won’t be disappointed. 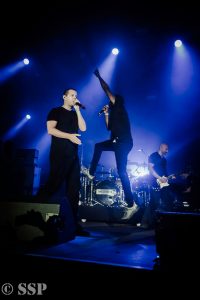 On to the reason we have all turned out for, may I just say I have never seen the arena as packed as it was tonight.  As The Streets take to the stage, there is only just enough time to draw breath, “Turn the page”, sees Skinner set the pace from the off, “I have a lot to talk about so listen, it’s not all about the Music”, he informed the crowd. “Don’t mug yourself”, has the arena bouncing, looking out upon the crowd it was like your favourite team slotting home the early goal, just to settle the nerves.

Skinner consistently pulled out little gems of Manchester’s history, repeatedly through the set talking about, Vegetarians, Suffragettes, the factories, splitting the atom, and he’s glad its not the capitol. “Everything is Borrowed”, is the track I came to see, hear listen and partake, as part of my education into The Streets, this song alone, confirmed to me that my love of music had made its way to someone else

“Dry your eyes” is a masterpiece of a performance, Kevin Mark Trail powers forward Skinners words as he has done all night. This led to the mass singalong of “I wish you loved you as much as you love him”.

The band return for a well appreciated encore, “Blinded by the lights”, “fit but you know it” and triumphantly ending on “Take me as I am”. For me The Streets where a breath of fresh air, dare I say something we have been missing here in Manchester for a long time.

Tonight, is one I will remember and cherish for a long, long time, this one was for you Kieran, “I came into this world with nothing, and I will leave with nothing but love.”