‘Better Each Day’ Has Been Released Via Big Scary Records

The single has been produced by esteemed producer Dave Schiffman

Hailing from Montreal, NOBRO are starting to make their way on to the radar of the world’s music media, and their latest single ‘Better Each Day’ is definitely going to help them on their way to success. Release via Big Scary Records, and produced by the esteemed producer Dave Schiffman (who has worked with Vampire Weekend and Adele), NOBRO bring their A-game with their latest offering.

Opening up with a 60’s soul feel to it, with hints of gospel, the song pulls you in close before knocking you back into your seat as things are turned up to 11. The sound of a can of drink opening and a thunderous drum roll kicks the song from soul to punk, and it’s not the usual case of calling a song punk for the sake of it. This really is punk. It’s punchy, filled with attitude and not what you’d expect after such a calm opening. Towards the end, the song does slightly fade for a return to the gospel style opening, but the punchy drums keep the song pounding along. 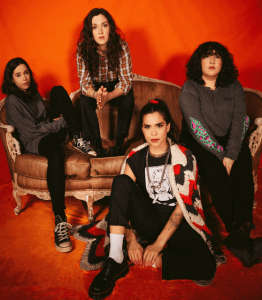 The band is formed of four women with impeccable levels of energy and attitude, and the songwriting skills to match. It’s not clear to me who takes lead vocal for this track, as it’s all split pretty equally and I’m not yet familiar with every member having only recently discovered the band, but what I can say for certain, is her vocal range and ability suits everything which the band are trying to achieve. It’s perfect for punk, but has the range to play into soul and rock too.  The band is made up of; Karolane Carbonneau (lead guitar/vox), Lisandre Bourdages (percussion/vox), Kathryn McCaughey (bass/lead vox), Sarah Dion (drums/vox) and it’s as clear as day to me that they have mastered their individual crafts to form a stronger alliance as a band.

“I was experiencing some kind of crisis at the time of writing ‘Better Each Day’ and if I remember correctly, it was a ‘writing music’ one,” reflects vocalist and bassist Kathryn McCaughey on the track. “There are times when songs come streaming out of you as though they wrote themselves into existence, and other times it can be as challenging as getting two purebred Persian cats to mate. I was sitting in our producer’s studio when he suggested I might like a little jingle he wrote for a commercial that never got used. I thought it was dope and voila, this song was born. One day you’re punk as fuck and then next you’re playing old unused car commercial jingles.”