Skip to content
Review: The Specials Live In Manchester

The Specials Brought ‘The Protest Tour 2021’ To Manchester

They performed in the shadows of Old Trafford, at Manchester’s O2 Victoria Warehouse!

Supported by Pete Williams, The Specials brought their latest tour to Manchester for a fantastic night of music, performing tracks from their upcoming album, ‘Protest Songs 1924-2019’ as well as big hits from their extensive back catalogue! Having Pete Williams kicking things off throughout this tour is quite a special thing to see, as he was the original bassist for Dexy’s Midnight Runners (performing on ‘Geno’) and toured with The Specials on the second half of their ‘2 tone’ tour. Not only is it nice because of the previous tour link, but his music suited the crowd, which is always so much better to see, as the crowd were getting behind him and enjoying the set, although it did take a song or two for people to start paying a fair amount of attention. 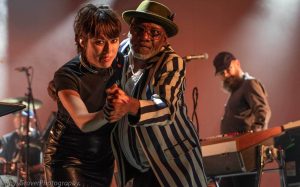 Anyway, after a set of around 40 minutes, it was a quick turnaround on stage, and on came The Specials. Starting off with the band playing the intro to their set opener for the night ‘Freedom Highway’, a cover song originally by The Staple Singers, it wasn’t long before Terry Hall, Lynval Golding and Horace Panter joined their band and ploughed into the set at full steam. A gig by The Specials is the same as it’s always been, Terry stays fixed to the centre of the stage, delivering stunning vocals and the incredible lyrics which make this band so special, whilst Lynval and Horace do the moving about, dancing and getting the crowd pumped. It works perfectly, and getting to see it unfold in person is something I recommend any music fan tries to see at least once in their lifetime. 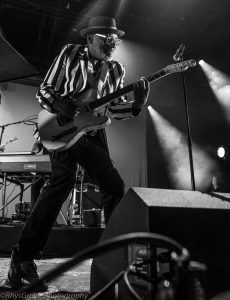 They followed on from ‘Freedom Highway’ with some of their own material, in the form of ‘Rat Race’ and ‘Do Nothing’, both of which got the crowd riled up and ready for a night of fantastic ska tunes. I’ve been to a few gigs since lockdowns lifted now, but it’s still so good to be back in the photo pits, watching a band give it their all, and having the crowd behind you giving it everything they have too. It was always going to be a great gig, and to see the sea of trilby hats, polo shirts, and shirts with skinny ties was always going to be something I had to see to believe just how good it looked.

Continuing with many of their own tracks, the band were delivering everything they had to please the crowd, pulling tracks from their early albums, as well as tracks such as ‘Vote For Me’, ‘Breaking Point’ and ‘The Lunatics’ which were from their 2019 album ‘Encore’. It was around the half way mark where the big hits started to come in, with ‘A Message To You Rudy’, ‘Too Much Too Young’ and ‘Ghost Town’ all featuring in the later half of the set, and but the time they came around, the crowd were nicely warmed up and ready to dance. From their upcoming album, the band performed tracks such as ‘Get Up Stand Up’, ‘Fuck All The Perfect People’ and their set opener, ‘Freedom Highway’.

The band are currently about half way through their current tour, and any remaining tickets for the remaining dates can be purchased via the bands website, where you can also pre-order their upcoming album!