A Fantastic Return To Live Music For Many

Throughout the day, it was a competition between bands and fans to see who could enjoy themselves more!

We started the day at ‘The Leadmill Stage’, a smaller stage opposite the main stage, which showcased some fantastic rising stars, such as the first act for us, ‘Caroline and the Lights’. A female fronted three piece chilled indie band, which was a nice chilled out introduction for the return of live music. The stunning vocals of the lead singer attracted a fair sized crowd despite it still being early on in the day. From here, it was a fair walk over to ‘The Library’, which is  a small outdoor stage, which throughout the day had a nice mix of bands who had not long been around, and some who had been on the live music circuit for a few years.

The first band we checked out on ‘The Library’ was The Warehouse Club, a Sheffield based band who had a nice energy to them and despite only recently forming, they are tipped as ‘ones to watch’ around the Sheffield scene. They’ve previously released tracks which have made their way into the iTunes Alternative Top 20, which means the band are definitely doing something right, and to do it pretty early on, shows promising signs for the future. They drew a good sized crowd, and delivered a great, lively set. We had a wander around the festival and noticed it was starting to get much busier now, so after a short watch of Ed Byrne’s comedy set on ‘‘T’Other Stage’, it was a short walk back to ‘The Library’ to catch The Rosadocs.

Now these definitely have something special about them, they drew the biggest crowd so far, and the energy coming from the band was fantastic. They got the crowd going, and so formed the first mosh pit of the day, with everyone just glad to be back after so long away from not only festivals, but live music in general. The Rosadocs definitely had an early Arctic Monkeys vibe to them, in their music as well as in the presence on stage, now whether that’s accidental or orchestrated, it doesn’t matter all that much, because whatever they are doing is definitely working in their favour.

After watching most of The Rosadocs performance, it was a hurried walk to ‘Sarah Nulty’s Main Stage’ for The Blinders. I have seen these perform numerous times now, but seeing them as what is now a five piece, brings a whole new level to the band. They’ve replaced their drummer and added a second guitar and keyboards, frontman Tom has lost the eye makeup but is still just as energetic and up for delivering a great show as he always has been. It was evident that these lads have made a name for themselves, because the main stage area had filled up pretty nicely for the band. They delivered a mix of their early, ‘Columbia’ tracks, as well as songs from their later two albums, all of which went down a treat.

As the afternoon went on, the talent of bands grew stronger and the fans grew more wild. ‘The Pigeon Detectives’ followed on from The Blinders on the main stage, and delivered what might have been the most energetic performance of the whole day, something which the band are well known for, but this time it just felt more special. Red Rum Club packed out T’Other Stage and got fans nicely warmed up in that tent before Slow Readers Club took to the stage and had the tent at nearly full capacity. However, in between Red Rum Club and Slow Readers, The Hara took to The Library stage and absolutely smashed it out the park. Their energy, their persona and the way the fans reacted was everything that live music should be, and everything which fans, and quite evidently bands too, had missed. 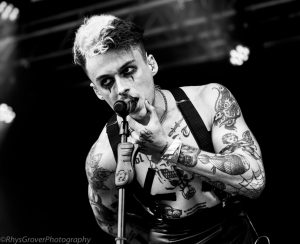 If you haven’t seen The Hara before, then go see them. If you have seen them before then you probably know what I’m getting at. The heavily tattooed, skirt wearing frontman jumps around the stage in similar fashion to Keith Flint of Prodigy, with a similar sound to Nothing But Thieves or Bring Me The Horizon. Don’t get me wrong though, they are a band with their own sound, their own style and their own way of wrapping fans around their fingers, and they do in perfectly. These were a fantastic band to have as a sort of sub headliner for that stage on the first day, and Billy Nomates closed out the stage in excellent fashion.

As with The Hara, if you are yet to listen to, or catch Billy Nomates live, then do it sooner rather than later. If you like Sleaford Mods then you’ll love Billy Nomates. She’s on her own on stage, accompanied only by a laptop with the beats on, but she fills the stage with Tim Booth-esque dance moves, and her vocal delivery is surprisingly calming, reminiscent of the likes of Lily Allen or Florence and The Machine. It works incredibly well with the style of music she is performing, and it won’t be too long before her name is everywhere.

Sadly for me, I didn’t catch as much of her set as I would have liked as I had to dash over the other side of the festival to get to catch The Kooks. Despite being at they heights in the early to mid 2000’s, they still draw a huge crowd, and they still deliver one hell of a performance. If anything, it works in their favour that they were at the height of popularity back then, because now when you see them, there’s a kind of nostalgia to it, as for a fair amount of people in their 20’s or early 30’s, it’s the music that was around as you were growing up, or as you started to go on nights out with your mates. They delivered a more relaxed set than The Pigeon Detectives, but the fans went just as wild for them, if not even more wild. They always seem to be able to knock it right out of the park with every performance, and they were the perfect way to get the crowd all geared up for the headlining performance.

Running surprisingly on time, (kudos to the organisers) The Streets, the project of Mike Skinner, took to the stage at pretty much dead on 20.15. The crowd were at the peak of their energy levels, and that always works in Skinner’s favour. He was getting in amongst the crowd, spraying Champagne over them from the stage, and delivering what was the perfect end to a truly brilliant opening day. He walked on stage to his latest release, ‘Who’s Got The Bag’ and continued through his set with a mix of songs of his early albums, as well as tracks from the new album.

We can’t wait to get cracking with the remaining days of Tramlines 2021, and reviews for those will follow. An image gallery for the festival will also be published some time next week!