The second chapter in the Salem story emerges from the underworld with news that they’ll release their new EP SALEM II on 7 May 2001.

The duo sharing the first taste of the EP in the shape of the new single Draculads and its special ‘time machine’ video.

As if the ever-evolving style and sprawling narratives of Creeper didn’t already keep him busy enough, Will Gould reacted to last year’s initial lockdown by delving into the archives to complete the debut EP from his side project Salem. Working alongside his friend and collaborator Matt Reynolds, Salem quickly sold out the first vinyl pressing of their self-titled debut EP and four social distanced shows.

Draculads opens with the kind of larger-than-life b-movie horror love letter that can only come from Gould’s poetically poison pen. “Maybe the blood of Jesus Christ is laced upon your lips, I get a little closer to God and too drunk each time we kiss.” The lyrics setting the tone for a blitzkrieg rush of melodic punk and raucous rock ‘n’ roll. The track-only stops for breath for the song’s cabaret croon breakdown.

The official video for Draculads takes us back to the Manchester music scene of 1985. It tells the fractured, non-linear story of two awkward, anxiety-prone teenagers who fall in love as The Smiths and New Order are at their peak and a new wave of influential bands begin to make an impact. Inspired by the monochrome cinematography of Control (The British biographical film about the life of Ian Curtis, singer of the late-1970s English post-punk band Joy Division) and the gritty social realism of, Shane Medows ’80s set British drama, This is England, the video is their third directed by Olli Appleyard of Static Dress.

“Draculads is the sound of two lovers kissing in a bar fight,” shares Gould. “It is an over the top love song literally about falling in love with a vampire. The video is a period piece and tells the story of two punk rock kids dating in England, in 1985. It was filmed in one single day and shot at many historic musical landmarks in Manchester. For the two indoor scenes, I built sets in my apartment, at one point transforming my own bedroom into the home of one of our characters. It is chaotic and romantic, destructive and dramatic just as the song it was shot for.”

The second EP builds upon the style that Salem established with their debut. From the tongue-in-cheek reference to The Smiths on the EP’s opening track William, It Was Really Something to the closing Heaven Help Me, Salem continues to play it fast, frenetic and fun. As with the best old school punk EP’s, SALEM II is an escapist rush of attention that commands your attention for 15 minutes before it’s time to drop the needle back to the start.

SALEM II will be released on limited edition vinyl as well as digital formats and is available to pre-order now (Link Here). 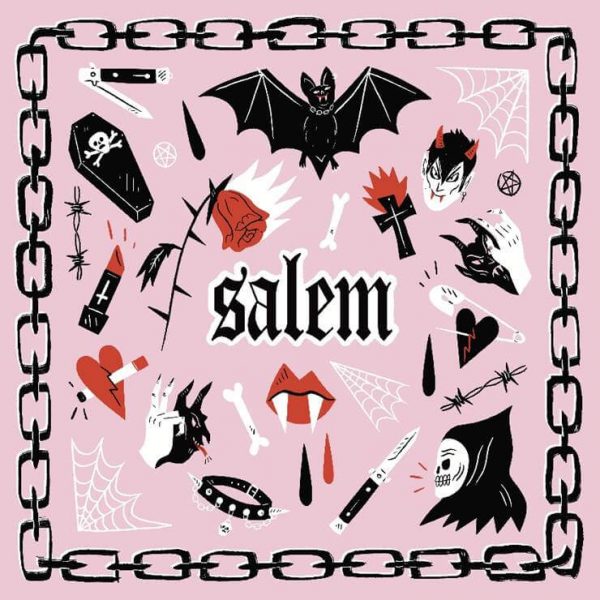