This Was The Second Of Three Nights In Manchester For The Band.

This tour has been two years in waiting, and it was more than worth the wait.

IDLES have spent the last few years at the top of their game. Performances like what I witnessed in Victoria Warehouse are the reason why. Now having four albums and one live album under their belt, there’s no shortage of incredible tracks to cram into their set list, if anything, it’s probably a very difficult task to pick which tracks to leave out each night. This current tour was originally planned to be in support of their third album ‘Ultra Mono’, however since then the band have released album number four, ‘Crawler’ and so numerous tracks from this album crept into the set list.

I sadly missed the first support, but from what I heard from fellow gig goers, Big Joanie were a fantastic opener for the night. Thankfully though, I made it to the venue and into the photo pit just in time for Jehnny Beth taking to the stage and nearly blasting the roof of the venue with her immense and powerful set. 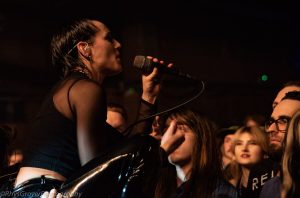 She took to the crowd on numerous occasions, and the delight on the face of the lucky fans who got to be a part of her quite intimate performance. I first heard of Jehnny Beth from her ‘Ultra Mono’ collaboration, and since then I have kept one eye on her goings on.

Around 20 past 9, and IDLES began to throw themselves around the stage. The band blazed through the opening notes of ‘Colossus’ before being joined by the enigmatic and distinct frontman that is Joe Talbot, and at this moment, you just knew that you were in the presence of something truly magnificent. IDLES have gained a reputation as one of the best live bands around, and I would safely say that not only are they THE best band around to see live, but probably up there with one of the best live bands of the past 20 years.

The set was formed of equal helpings from each of the four albums, and you really couldn’t have asked for much more from the Bristol four-piece. Their set lasted around 1.5hrs, and I could easily have watched a set double the length, as I’m sure most of the crowd could have. The way each member throws themselves around the stage, the dancing and hypnotic strobe lights, and then both of those paired with one of the best crowds I have seen for a long time means that you cannot look away from the stage for even the slightest moment, scared to even blink that you will miss something incredible. I’ve been lucky enough to see some of the worlds biggest bands, and very little comes close to what I witnessed at this gig. 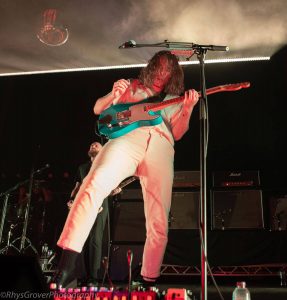