The First Of Two Nights At Manchester’s Bridgewater Hall

He was joined by close friends, Toria Garbutt and Mike Garry

Dr John Cooper Clarke is currently on tour across the UK to tour his memoirs, which were released in 2020. Asa result of the pandemic, he is just now getting the chance to tour the book, after the original tour dates were rescheduled. Across all dates, he is joined by Toria Garbutt and Mike Garry, both of whom are fellow northern poets, delivering their own style of fantastic poetry to warm up the crowd before the good doctor takes to the stage himself.

As with last time I saw this trio of poets, the opening slot was given to Toria Garbutt. Hailing from Leeds, she delivers a style of honest and thought provoking poetry, with a delivery like no other. Stood isolated on stage, the room falls silent as she steps up to the mic, clad in a polo shirt dress and boots. Tales of drug abuse, suicide and her working class upbringing are the focus of her poems, and the only thing you could ask for would be more. After her 10-15 minute set, she introduces Mike Garry. 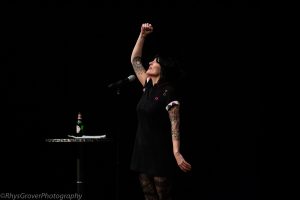 Just like John Cooper Clarke, Garry hails from Manchester, and starts his performance off with a story of his background. Mike was raised in Fallowfield, and his poems reflect his memories of Manchester as a kid and through his adolescent years, as well as poems which reflect issues in the rest of the world. His set was made up of some of his best known poems, the likes of ‘Penny For A Guy’, ‘Spring Crossing’ and saving his most popular for last, ‘Saint Anthony’. A short interval followed, in which Mike and Toria headed into the foyer to meet fans and sign merch. It’s nice that they take the time to meet those who have supported them.

Now time for the main event, Dr John Cooper Clarke walks onto the stage to hug applause, donning a grey suit jacket, matching hat, jet black drainpipe jeans, and the glasses which have been apart of his look for as long as he’s been doing his thing. Through a mix of tales of his life and the inspiration behind poems, to jokes and his most popular works, JCC delivered a night to remember. Despite having seen John Cooper Clarke before, there was something magical about getting to see him again. For some, this man may not be the icon of Manchester, but for myself, and I imagine a few others in the Bridgewater Hall, without JCC, Manchester would be missing something. 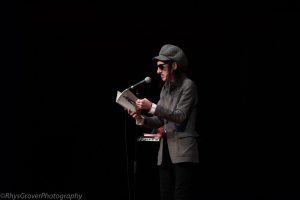 The set opened with ‘Hire Car’, which was nice to see as it’s a personal favourite of mine. He swiftly followed this up with ‘Get Back On Drugs You Fat Fuck’, as he joked that this is all people say to him when he comes back up North, having lived in Essex for the last 30 years. ‘Luckiest Guy Alive’ follows, the poem from which his last book of his works received its name. His next poem was introduced as ‘Bedblocker Blues’, and for some they may not recognise the name, however it is the rebranded ‘Things Are Gonna Get Worse’, a poem John wrote before turning 60, as a statement of the tribulations of getting old.

‘I Married A Monster (From Outer Space)’ was extremely well received, as was ‘Beasley Street’. Whether you know Cooper Clarke’s work or not, it’s worth going to see him, because it’s like watching stand up comedy performance. I’ve been to many stand up gigs, but I laughed more at this gig than I did at many stand up gigs. ‘I’ve Fallen In Love With My Wife’ is dedicated to his wife, and he closes the set with ‘Trouble At Mall’ and the poem brought to fame by the Sopranos TV Show, ‘Evidently Chickentown’.

Two poems form the encore, and without these two poems, you wouldn’t feel the night was complete. ‘Twat’ receives huge cheers, and ‘I Wanna Be Yours’ closes the evening, a poem for which he thanks Alex Turner for taking it to the masses. Toria and Mike rejoin him on stage to thank the crowd before they all exit to a standing ovation.

You can buy John Cooper Clarke’s memoirs ‘I Wanna Be Yours’ online or from any good bookstore, and support Mike Garry and Toria Garbutt by purchasing their merch and their poetry books.