‘R Kid Graced The Stage In His Beloved Etihad

Goat Girl and The Charlatans were given the honour of supporting the Mancunian icon.

This was it, the moment every adoring Oasis/Liam Gallagher fan had been waiting for ever since the tickets first went on sale. Liam Gallagher was freshly prepped for the gig, having warmed up in Blackburn a few weeks ago, and now he got to do the real thing, with a stadium full of fans eager to watch. Paul Gallagher, Goat Girl and The Charlatans had all come before, and warmed the crowd up, so when it was finally time for Liam to take his place on the stage, the atmosphere was at tension point in the Etihad.

‘Champione, Champione’ rang out from the speakers, and then a short video screamed across the screens which decorated the dauntingly tall stage, showing pictures of Liam’s incredible career, and soon the real life version was there. On stage, in front of his disciples, ready to show everyone what he was capable of. From the off, he was in fine form, strutting across the stage with all the swagger, style and finesse that he has become known for. His “Don’t Give A Fuck” attitude was in clear view for all to see, and he donned one of his signature parka’s, aviators and waving the tambourine around like Mercury waved his mic. 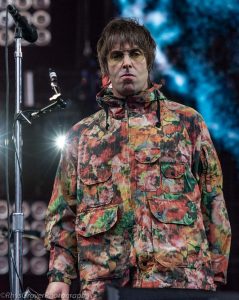 The curtain raiser for the night was ‘Hello’, swiftly followed by another duo of Oasis’ biggest tracks, as “Rock’n’Roll Star” and “Morning Glory” completed the opening trio. In between the each track, he took time to thank his fans, and get them riled up to really get things kicking off. ‘Rock’n’Roll Star’ was dedicated to the absent Bonehead, who was due to perform alongside his former Oasis frontman, but sadly illness has put this off, and many fans were displaying banners showing their support. Before charging into ‘Morning Glory’, Liam addressed the team who calls this stadium home, and got the crowd to participate in doing the ‘Poznan’ during the opening notes of the song, a celebration which has became synonymous with the blue half of Manchester.

As we left the photo pit, Liam addressed the hefty numbers of photographers leaving. Asking us to make him look as good as ever in the images, before quipping it shouldn’t be too hard to make him look good, which obviously received huge cheers from his fans. It’s always nice to be recognised by the artist, and it’s even more special when it’s one of Manchester’s own, performing one of the biggest gigs of the year. ]

A quadruple hit of solo material followed, which received a warm welcome, but nothing quite compares to the atmosphere levels when Liam and his band are smashing out some of Oasis’ biggest tracks, with ‘Slide Away’, ‘Roll It Over’ and ‘Stand By Me’ all featuring in the main set, alongside some of Liam’s biggest solo material, such as ‘C’mon You Know’, ‘Once’ and ‘Wall Of Glass’. 16 incredible tracks saw the main set end, but fans knew there was more coming, and weren’t wanting to wait around. 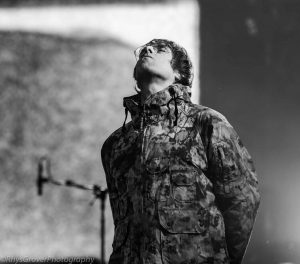 5 tracks followed, ‘Some Might Say’, ‘Cigarettes and Alcohol’, ‘Supersonic’, ‘Wonderwall’ and ‘Live Forever’ making for one hell of an encore, as the atmosphere continued to rise as each note passed, which made ‘Live Forever’ become a truly hair-raising moment. Whether you love Oasis, or care more for one of Manchester’s other bands, you cannot deny that there’s something truly special about being in the presence of so many people as they belt out the big Oasis numbers.

Just when people were thinking it was all over, the biggest Manchester gig of the year, Liam returned to the stage for one last number, wrapping the night up in incredible style with a stunning performance of ‘Champagne Supernova’, a perfect closing number for what was an even more perfect night of live music. It’s gigs like this which make you remember just why live music was missed so much during the pandemic.

Liam heads to Knebworth for what are set to be two incredible nights this weekend, both nights are sold out, and Kasabian join the line-up. It’s sure to be a historic performance in Liam’s solo career, as he performs in the same place in which Oasis created some incredible memories for their fans, many of whom I imagine will be in attendance this time round as well.