The Modfather Returned To Manchester

Paul Weller has had one of the best careers he could have asked for. Having been frontman of The Jam, a band that defined a generation, before moving onto the incredible The Style Council before finally going solo, all whilst continuing the same level of success he had always known. His signature look, paired with his incredible songwriting turned him frontman of a mod band, to an icon of the genre, and on Friday (15th April) night, fans got to witness Weller in an equally iconic venue.

I missed the support due to work, but as I arrived at the venue, near enough everyone had already showed up and got into place, so things had clearly got off to a good start. Spirits were high and it was the busiest I’ve seen the Apollo before the main act was on stage for quite some time. When the moment came for Weller to take to the stage, the lights flashed across the stage as ‘Tomorrow Never Knows’ was blasted through the speakers. As soon as he took his place on stage, a quick wave to the crowd and it was straight into the set. 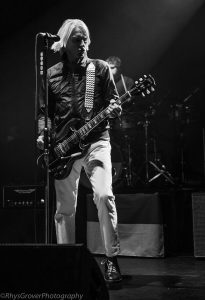 Weller and his band powered through the opening tracks, taking very little time in between to speak to the crowd, which isn’t always a bad thing. The crowd weren’t being ignored, but Weller knows that they’ve paid their money to hear the music, not to hear him talk. ‘White Sky’,’Long Time’ and ‘Cosmic Fringes’ formed the opening trio, and each track was extremely well received. Weller is the sort of musician who leaves the biggest tracks for his closing numbers, but having such a huge back catalogue and such devoted fans, it was a strong atmosphere from the word go.

Performing 28 songs in total, with two encores, there was no meat left on the bone by the end of the night really. Playing a handful of The Style Council’s biggest tracks, with two tracks from The Jam thrown in for good measure, there was something for every Weller fan to enjoy, and it’s not too often that you get a solid 2 hour performance from anyone these days, but you’d expect nothing less from Paul Weller, a man who is dedicated to delivering a night to remember every time he takes to the stage.