Arriving at Upcote Farm, the home of 2000trees, with an unchartable level of excitement. Plus, due to the blazing sun and high temperature a burning desire to jump into any body of cool water.

After two years of interruption to our summer festival season, the return to 2000trees feels even more exceptional than usual. However, change is afoot in the Cotswold Hills. Will this remarkable festival still be its extra extraordinary self?

Wednesday and Thursday at 2000trees:

The early entry option, still a new addition to the 2000trees experience, has been seized on mass this year. It’s barely lunchtime and the regular 30 to 50-strong queue is substantially larger than previously, as our skin crisps in the shadeless field, awaiting the gates to open. Once in it’s a sweaty rush to get set up and off to see the first bands. 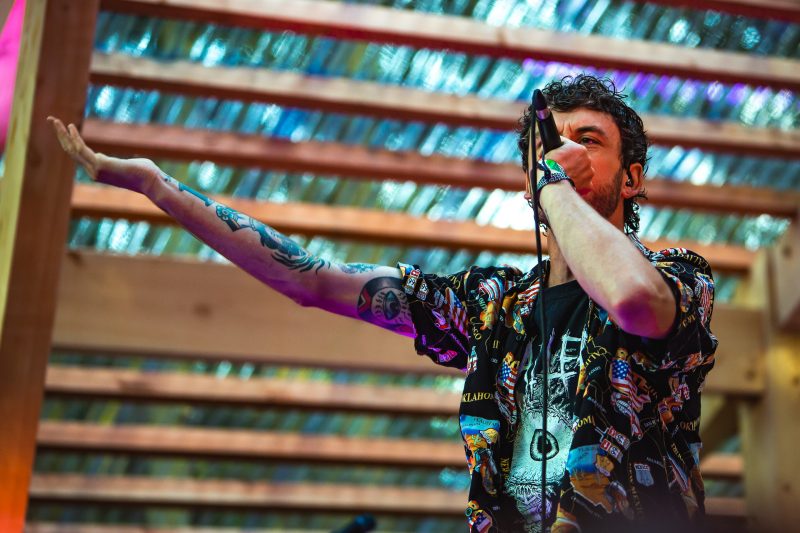 The newly built Forest Stage has gone from the almost mythical sentry style with two walls, roof and floor to a substantial porch-style stage. Palm Reader’s adventurously intense set remarkably flows in sync with the dazzling sunlight that is dancing through the shadows of the trees. Josh McKeown extreme vocals feel solitary yet full of depth alongside restrained yet fluctuating melodies. The set is heavy with tracks from their latest album, Sleepless, with Internal Winter and Swarm from Braille dropped in for good measure.

The visceral slap that Delaire the Liar delivers with each live show is hard to describe from explosively sharp punk rock to a heart-wrenching and graceful balladeering. Ffin Colley conveys skilfully nuanced and vigorously impassioned narratives in his performance. His intense vocal style and the band’s energetic riffs are full of texture and raw bite.

The set starts with Shovel and continues at that high level throughout. FURNACE allows bassist Em Lodge to take on the vocals. Adding a fresh harmonious edge that compliments Colley’s and platforms the versatility of the band. Bowing out with the immensely raw DOG its blistering riffs leave ears ringing as an appreciative crowd roars with approval.

The Axiom is bursting at the seams and the temperature inside at furnace levels when Holding Absence takes the stage. If this Welsh four-piece is feeling it after many heavy months of touring, they certainly don’t show it. Lucas Woodland kicks and belts out Celebration Song and Curse Me With Your Kiss with the energy of a bolt of lightning. He’s matched only by the electrostatic force Ash St Green is creating between sticks and mylar. Keeping security on their toes wave after wave of crowd-surfers are lifted and dragged over the barrier.

Together the audience and band bath in a set overflowing with unbridled cathartic energy and undiluted emotional assault. With Like a Shadow, Beyond Belief and Afterlife wringing out vigour we thought the sun had drained away. Scott Carey incendiary extreme vocals for the band’s latest track, Aching Longing, was a colossal adrenaline boost. The crowd became a sea of bodies on bodies, arms aloft and many awash with tears as Holding Absence closed with Wilt. Leaving us sopping, sobbing and screaming for more.

Friday and Saturday at 2000trees:

Be careful what you wish for is the perfect idiom for a hot sunny festival. Avoiding sunburn, and sunstroke while taking part in vigorous physical activity in open fields to the best music for many hours is a tough call. But there are bands to see and artists to applaud. Revived by Franks Water, a registered charity and social enterprise with a global vision for everyone, everywhere to access safe, we head to the stages.

The Forest stage might not feel as intimate and secretive as it did before, nonetheless, it is still a shady self-contained enclave away from the bustling main arena. Ian Miles masked and dressed head to tie in black sits in front of his mic, his guitar balanced on a crossed leg. It is hard to imagine the potency, complexity and spectres Miles conjures with so few tools.

Manoeuvring through complex issues including neurosis, isolation, depression, loss, and death with a wistful tone. Minimalist, it feels, by design; a voice and melody sharpen the exploration of pain and insecurity. What Miles creates, in this leaf and branch roofed space, is a unique dialogue between music and art performance that is compelling and emotive in equal measures.

Puppy, deliver a set that perfectly encapsulates their identifiable hard riffs, fuzzy undercurrents and sharp layers of melody. Showcasing tracks from their latest album, Pure Evil, has a heat-exhausted crowd swaying. Glacial in particular its infectious strains engage and grip the audience’s attention. However, it’s the tracks like Black Hole and Entombed from their debut long player, The Goat, that gets people moving.

Turnstile frontman Brendan Yates is a master at enthralling a crowd regardless of if he’s on or off the stage. The luminous hardcore band burn through songs at a pace that leaves your head spinning. Opening with Mystery from their latest album, Glow On, a long player soaked in unity, optimism and energy that translates to a live setting such as this with ease.

The joy and respect in the audience is tangible as Bassist Franz Lyons’ thick chords on Moon and the Latino vibrations of Don’t Play have everyone throwing shapes. Choosing chaos for their final track, T.L.C. (TURNSTILE LOVE CONNECTION), was the only option for the explosion of energy that the audience and band released. BOOM BOOM BOOM indeed.

2000trees 2022 was a long of fun a lot of sweltering, sticky, strenuous fun with a lineup you couldn’t fault.

Highlights could easily have been most of the 2000trees festival. It was busier than usual and there was, not before experienced, aggression in some of the audiences. Was it the heat? Was it too many Strongbow Dark Fruits? Was it just too many people in the space? Probably a combination of all these elements contributed.

The music was without a doubt the star of the event. Chapter and Verse, Thrice, Nova Twins, and Dinosaur Pile-Up all produced incredible sets that will live long in the memory.

There are a multitude of ticket options available starting with day tickets without camping, Friday/Saturday tickets and full weekend tickets both with camping. There are also VIP tickets that feature VIP access, car parking and merchandise. Link Here.

Flick Of The Finger will be bringing you all the 2000trees 2023 news and updates between now and the festival next year/ You can also find details at the official 2000trees website. You’ll also find 2000trees Festival on Facebook and Twitter where they tweet as @2000trees.