The Tour Is In Support Of Their Latest Album ‘Typhoons’

Royal Blood showed that they still have that signature rock attitude

The curtain raiser for the evening came in the form of The Amazons, as it has for the whole tour. A relatively short set of around 30 minutes, but it was filled with style, attitude and pure adrenaline as the band ripped it up on the stage in front of a sizeable, adoring crowd. During the set, frontman Matt Thompson took the time to list the venues in Manchester, each one receiving a bigger cheer than the last before an almighty roar tore through the arena as he finally got to the end of the list. 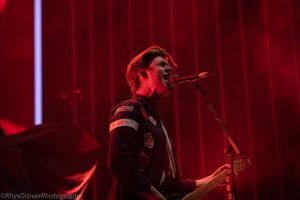 A quick turnaround, and the Brighton rock duo we had all come to see soon took to the stage. Arms raised, lights dancing around the arena, and amps turned up to 11, things were about to get loud. Mike and Ben take their crowd’s energy in their stride, and as they power into their opening track, the atmosphere in the arena is at its peak. It’s the title track of the latest album which kicks their set off, and is well received by the crowd, as is the follow up track ‘Boilermaker’. The two lead tracks from their latest album were always going to be a strong opener, and that they were. A quick switch of bass, and Mike was ready to keep things moving as he warms the crowd up as they kick into ‘Lights Out’.

One thing you can really tell from their set, is that their earlier material is always going to be more well received. It was the same case when I last saw the band on their last UK tour to support album number two, however it’s a case of getting the new material to become a staple of their live shows and give time for the newer material to get engrained on the minds of their fans so they can sing every word. This time round, their material from the second album was just a s well received as their big hits from their debut. 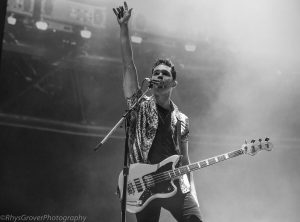 This gig should have taken place last weekend, however the band had to postpone due to a positive covid case. Luckily the band recovered quickly and fans didn’t have to wait too long before they got to see one of the loudest and most energetic live bands around. The performance was a fairly even split between their debut and their latest album, with a couple of tracks from their second album thrown in, as well as their latest single ‘Honeybrains’ which was released earlier this year.