This Was The First Of Two Nights At Victoria Warehouse

For the tour, The Kooks have roped in The Snuts to open each night, and whether you are a diehard fan of the group, or you don’t know anything about The Snuts, you cannot deny that they are the perfect opening act. They performed for a solid half hour, blasting through their repertoire and gems such as ‘Glasgow’ were Monet to remember for their fans. It’s always good when the support are well chosen, because the venue is busy and roaring to go from the get go, and this always helps to settle the nerves for any opening band.

The contrast between The Snuts’ stage setup and the setup for The Kooks was immense. The Snuts opted for moody, heavy lighting and The Kooks used every lumen of light at their disposal, creating a light show which was equally as good as the band’s performance. 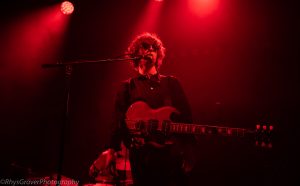 The Kooks opened up with frontman Luke Pritchard on his lonesome, centre stage with an acoustic, performing ‘Seaside’ which received incredible welcome from the crowd. Cheers, whistles and woo’s echoed around Victoria Warehouse throughout the track, and the energy was lifted even more as the rest of the band filled the stage to power through the rest of the set. ‘See The World’, ‘Sofa Song’ and ‘Eddie’s Gun’ followed, and set the tone for the evening. It was to be a night of high energy, and the crowd were more than happy to oblige.

If you’re not a massive fan of The Kooks, or don’t know their entire catalogue, then I still highly recommend going to see the band live, as their big tracks were scattered throughout the set list, so you’d still feel like you knew the majority of their material. ‘She Moves In Her Own Way’ made an early appearance, around 6/7 songs in, and the crescendo reached it’s peak at the end of the night, as the band and crowd blasted ‘Naive’ to wrap up what had been a fantastic night.