The weekend kicks off for me with Shed Seven, and despite the poor weather, spirits were clearly high as the crowd began to pour into the festival, ready for a day of lively atmospheres and incredible music. I’ve seen Shed Seven numerous times now, and with each time I get the pleasure of watching them perform, they seem to have something extra to give their adoring fans. This time round, they were smashing their big hits into the setlist, one after the other, and to add to it, there was a pretty special cover of Elvis’ ‘Suspicious Minds’.

From there, it was a short walk over to T’Other Stage to catch the end of the days comedy sets, a slot that was given to the ever comical Seann Walsh. Having seen Seann on tv, it was nice to get the opportunity to see him perform in person, and the crowd that had gathered were lapping the material up. The comedy sets at this festival are exactly why I love it, and it makes it worth the journey over to Sheffield from Manchester.

The weather was on and off all day, raining one minute, and then warm but overcast the next. I’d already changed from trainers to boots before even getting into the festival arena, as the short walk from the carpark was enough for me to release trainers were never going to be a good idea.

My first journey into the Leadmill Stage was for the consistently brilliant Brooke Combe. I first saw her supporting Miles Kane in Manchester earlier this year, and I loved having the opportunity to see her doing her thing once again. She’s been making a great name for herself ever since, and recent performances have indicated that Charlie Salt from Blossoms has stepped in on Bass. There was a healthy crowd gathered, and the tent was near full, however there were a number of people shouting and chanting for Charlie on bass, which must have been slightly off putting for Brooke as she is a star in her own right, and it’s her performance.

Lime Garden followed Brooke’s set, and it was my first time seeing them. Again there was a healthy crowd their to see them, and the four piece all girl band were really in their stride. Each member contrasts the others, going for different looks, with personas all of their own. Occasionally bands ruin their look by all trying to be uniform, but Lime Garden are bringing something different to the table. Not only do their styles work together in a visual sense, but they bounce off each other musically too. Mixtures of 60’s/70s rock paired with the late 80s punk vibe, and a bit of new wave thrown in made for a set that you just couldn’t take your eyes off. 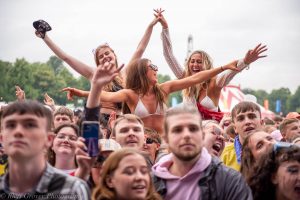 Before Lime Garden, there was Baby Queen on the main stage. I first heard Baby Queen at this festival last year, on the smallest stage. This time round however, she is middle of the day on the main stage, a true sign of progress and success. Her style and attitude meant the crowd were hanging off her every word, and she was playing with the energy like a magician plays with cards. There’s only one direction which Baby Queen is heading, and I cannot wait to watch it unfold.

The rest of my day was mostly spent around the Main Stage, soaking up the atmosphere from the crowd and watching the incredible sets. I started it the run with Jade Bird, an artist I’ve been wanting to capture for a while, and getting the opportunity to yesterday was incredible. She has rose to fame over the last few years and grown an incredible fanbase. Declan McKenna followed her and he really is one of the main focuses for the moment. 5 years on from releasing his debut album, he drew one of the biggest crowds of the day and the crowd were eating out of his hand, hanging off his every word. his onstage persona is unlike anyone else, the style and charisma is something pretty special to see. 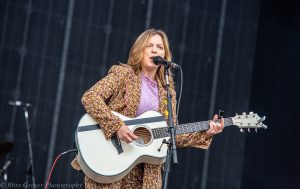 We were getting to the tail end of the first day now with just a handful of acts remaining. A short dash over to the Leadmill Stage after watching McKenna allowed me to witness a band that have been on the radar for the last few months. They are The Clockworks, a Northern Irish band with their own unique sound. On stage, it’s like watching a slightly more energetic version of Fontaines DC, but their music is a world entirely of it’s own. They have something special and there more they work to hone their talents, the bigger these guys will get. They’ve already started off well having singed to Alan Mcgee’s ‘Creation23’ record label.

It’s down to the final two, James and Sam Fender. Depending on who you ask, these two could have been put in any order on the bill, both extremely deserving of having that headline spot. I think the organisers picked well with Fender finishing the day off, as the crowd was packed through with a younger demographic, so it was always going to be a special headlining slot. A healthy crowd had gathered already as James had taken to the stage, and from the get go, frontman Tim Booth was in his full stride. The crowd were at his mercy as he swirled and swayed across the stage, and then he decided to take the stage to the crowd, performing his entire third track from the barrier, with the crowd clutching to be able to touch someone they idolise.

Sam Fender has been growing massively this year, having recently performed at his own headline gig in Hampden Park drawing a crowd of around 45,000 people. This was his first festival headline slot, and he absolutely blew the crowd away. I think near enough everyone at the festival was watching, as the crowd had spread out, right to the back, and the look on Sam’s face as he ran onto stage said it all. He really has made it. Going from strength to strength, putting in the hard graft and pushing himself to the limits has paid off big time.

Keep an eye on our socials for the rest of our coverage, and if you’re going to the festival, stay safe and look after one another!