Tramlines Festival Comes To An End After Another Incredible Year

After a full weekend of incredible talent, Sunday was a chance for everyone to revel in the moment before returning to reality the next day

Sunday was a shorter day in all for the festival, with an earlier curfew meaning there were a few less bands on. However there was no short supply of talent, and this was apparent from the get go, as I headed down to catch The Coral to kick off my day. They’re a band that have been riding a steady wave of success for some time, and are always a great festival band, as they get the crowd singing along for the whole set. The crowd wasn’t all that big, mostly due to the rain which looked to be in for the day, but those who had braved the weather were making up for those sheltering from the rain, and the atmosphere was lively throughout.

Next up was some time for me to discover some new music, coming from Dead Pony, who had a sizeable crowd gathered in the Leadmill tent for the majority of their set, and the rain had stopped so the crowd were there for the band and not just to shelter from the rain. They’d been recommenced by a fellow photographer, so I knew it would be worth getting down to their set. They hail from Glasgow, a city which seems to be overflowing with some great up and coming talent at the moment.

Due to clashes, my whole day was spent jumping between Leadmill Stage and Sarah Nulty’s Main Stage, which is a shame as there was some great talent performing over at T’Other Stage, with the likes of Scouting For Girls, Elvana and Kelis, as well as some great comedians earlier in the day, whose sets were wrapped up by the ever popular Jason Manford.

Sports Team have solidified their own name in amongst reviewers and the music media, they are one of the strongest upcoming bands and they’re captivating and energetic set is something everyone should see at least once, because if you see it once, you’re sure to fall in love and see them again. The charisma of the entire band is a sight to behold, holding their own on stage and diving around like they’ve been possessed. I can only see big things for these guys, and I can’t wait to watch the magic unfold. The Goa Express offer a very similar feeling, having been trying to get that break for some time now, but it’s sure to come, as again they drew a sizeable crowd for their Leadmill Stage set.

The final three were ready to take to the Main Stage, and Reverend + The Makers were given the task of getting the crowd ready for what was to come. Being from Sheffield, and a huge Sheffield Wednesday fan, it’s just right that they perform at this festival. The crowd adore them, every lyric sang back to them by every onlooker, and every instruction to bounce or mosh followed to the extreme. A new bassist was welcomed with open arms, and when Rev are on stage in Sheffield, nothing is going to stop them, and nothing will stop the crowd from showing their adoration, not even the rain which was starting to settle in for the day once again. 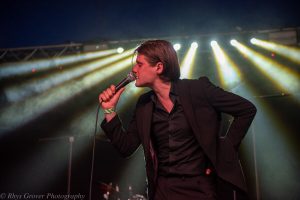 Do Nothing were given the task of warming the Leadmill Stage crowd ready for the headliner, and they did it beautifully. I have followed this band since I captured them at Liverpool’s Sound City in 2019, and since that first discovery they have leaped from strength to strength. The enigmatic performance from Chis Bailey is reminiscent of David Byrne or Ian Curtis. He’s almost motionless yet you can’t help but stare as he blasts out their wonderful tunes.

The Wombats delivered a performance that was fitting of the day, and the whole festival. I put them in the same category as The Coral, a band who have been showing their success off to the adoring festival crowds for numerous year, every album being a near instant hit, and on elf those bands that when you see them on the festival line up, you just know they’re going to deliver something special. 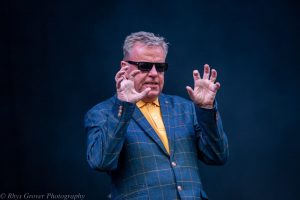 Yard Act and Madness remained. It was down to the final two gigs, a moment that can get pretty emotional, especially after such a good weekend. Tramlines Festival never fails to deliver something magical and something you’ll never forget. Picking these two bands to wrap up the weekend says everything you need to know. Madness filled the main arena with their always loved set of their biggest tunes, the crowd singing every word of every song and just letting off any excess steam before returning to their day jobs the next day.

Yard Act, although not as established was much of the same. A band who have worked hard to establish themselves in a scene that is already full to the brim, and they broke through. It’s not a case of luck though, especially for a band like this, it’s purely down to their skill and their ability to captivating an audience. Their debut album was something to behold and will go down as one of the landmark albums of the indie scene.

Tickets for next years festival go on sale at 6pm tonight, and if the last two years are anything to go by, you’d be silly to miss out.