Following a widely acclaimed world tour performing both “Substance” albums of Joy Division and New Order with dates across North and South America, Europe, Australasia and more in the past year, Peter Hook & The Light are back in the UK and Ireland in late 2017 with a run of dates for the show. 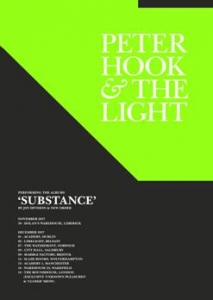 The London Roundhouse date for both Joy Division albums is fully sold out and other concerts are close to capacity with some tickets remaining but these are bound to go quickly.

The band have just returned from a hugely successful tour of Australia and New Zealand and are currently in the middle of dates in Holland and France before returning to the UK for the final shows of the year.

“Hooky has done this. His tours are for the fans, and his fans flock to him. Every person standing in the Tivoli has been affected somehow by one of his bands, and have now witnessed what is a greatest hits of both. As they finish the final song, we applaud the man who had a hand in changing our lives in one way or another.” Society Of Sound