Before the muchly anticipated Kula Shaker ascend the stage, after a 6 year break from touring and recording, the eccentric 90s psych indie rock band from London, are back again with the newest material for their album K 2.0 the sequel to their debut album K.

As the audience waits, the room is delighted to the smell of incense, wafting from the stage, filling the room and balancing the energy. A moving kaleidoscope projection lights up the stage, producing a swirling menagerie of colours and imagery of religious deities like Krishna to more present day celebrity figures like Kevin Spacey; weird, but funny. 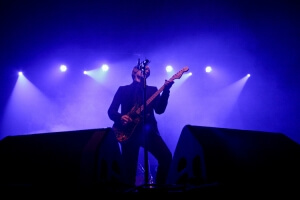 All this Krishna goodness and hippy love is charming the crowd and taming the crowd’s restlessness to finally see the band after so long, but you can still feel the tension in the air, just give the people what they want. Overall the mood is chilled, the clientele are a mix of fans from the 90s when Kula Shaker were at their prime and the new generation who weren’t there but kind of get what it’s all about.
Finally the music fades from classic old soul records, finishing on a satisfying high crescendo of Minie Riverton’s Les Fleurs and Kula Shaker take to the stage. They kick it off with their 1998 hit Sound of Drumstaking us all back to their heyday in the late 90s with everyone jumping up and down. Gokula and Hurry Om follow, showing the bands ingrained Hare Krishna and Indian influence. 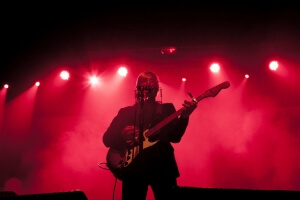 Kula Shakers debut album K features a storytelling narrative of Indian spiritual journeys with Grateful When Your Dead/Jerry and Temple of Everlasting Light, full of indulgent, playful, psychedelic guitar solos and ethereal singing. Then to link back to the present day, the band plays new singles Mountain Lifter and Infinite Sun from K 2.0, harkening back to those classic Indian sitar, tanpura and tabla sounds, enthused with simple yet enlightened lyrics;“She changes everything she touches and everything she touches changes”. 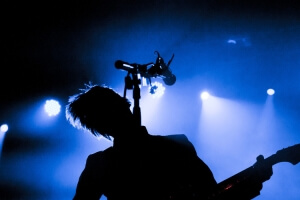 Frontman Crispian Mills is a likable fellow, ever thanking the crowd for coming and showing their support, whilst reminiscing about being in Manchester again after 6 years since their last European tour. On Kula Shakers hit songs, Mills jumps about on stage with his trademark, statement piece blonde hair swooshing around in the air, though Mills later confesses that due to a couple broken ribs he can’t jump around as much as he’d like too, so not to be mistaken for an old fart. But you can’t deny that the whole band put a lot of energy into their set; they’re full of life, enjoying being back on tour and playing sold out shows around the world.

As the night draws on the band perform an eclectic mix of hits and singles from their 5 studio albums including Shower Your Love, Mystical Machine Gun and the catchy 108 Battles (Of The Mind) fromPeasants, Pigs & Astronauts, Second Sight from Strangefolk, Peter Pan and the lovely Ophelia fromPilgrims Progress, and 303 from K and the crowd are back jumping again with another catchy lyric and winey guitar riff. 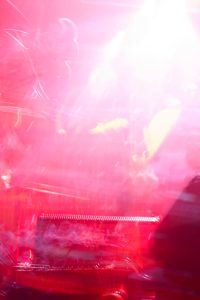 Finally, the track we’ve all been waiting for, their best, well known song that you don’t even have to know Kula Shakerfor to know, it’s that engrained in our psyche, one word, Hush.

Continued with the epic Tattva and the band ends their set with another one of their well-known tracks,Hey Dude to leave everyone on a high, reminiscing about the good old days back when Kula Shaker was at their height in Post-Brit Pop. Of course the band returns to the stage after a boot stomping, clapping encore plea from the crowd, we are treated to a rendition of the classic Hosanna and the transcending Hare Krisha chanting Govinda, you can feel the love in the air, as everyone chants in unison, “Govinda Jaya Jaya, Gopala Jaya Jaya, Radha-Ramana Hari, Govinda Jaya Jaya.”

On reflection a very fun, energetic and enjoyable night that was surprisingly spiritual, weird yet beautiful, with the mixture of psychedelic rock and Indian influences.