Reef are an English band hailing from Glastonbury. In its self a statement worthy of an accolade or two. Who else could pass off Glastonbury festival as just another local gig?

The band members include Gary Stringer on vocals, Jesse Wood on guitar, Jack Bessant on bass and Dominic Greensmith on drums.

Coming on stage at an almost full Manchester Academy 2. 900+, the band seemed right at home, acknowledging faces in the crowd, there is definitely a buoyancy in the air as there always have been at a Reef gig. 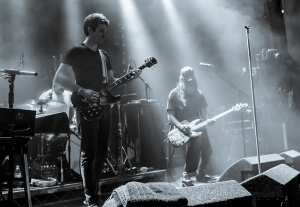 In the early days the band where simply a breath of fresh air, a band who showed up and made it their mission to make sure you had a great time, like a good bottle of whisky, there’s a real depth to the band, simply they have matured, bringing back memories of all those heady days and nights, a chance to reflect and savour a guilty pleasure right from the start. The bottle is open and we are staying until we finish.

The look of the band has also changed, Gary Stringer is still pulling his shapes as only he can, and confidence has never been an issue when you have a voice as blended and soulful as Stringers.

Greensmith on drums, keeps the heartbeat of the set thrusting forward, which is not easy whilst being driven by the slick guitar work of Jesse Wood, son of Ronnie Wood, clearly a riff off the old block. 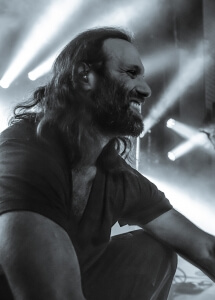 Jack Bessant bass, a cross between Seasick Steve and a cast member from Pirates of the Caribbean, with a thick grizzly beard, tends to hang at the back, until he is ready to push forward taking the front of the stage and the attention of a crowd who have whole heartedly come to not only enjoy but equally participate.

Tune after tune was met with more and more enthusiasm as the set rolls on, is it really 20 years ago since these guys burst on the scene? “Feed me”, and “come back brighter” keep the classics rolling, whist the party distinctly turns into a carnival for the onset of “Place your hands on me.”

Reef are a band who know how to put on a party, they seem to bring everything and leave it all out for everyone to enjoy. When you have a band so accomplished in how they perform, its one party you don’t find anyone in the kitchen.

Images and Review by Billy Seagrave