Tom Clarke delivers “We’ll live and die in these towns” at the 02Ritz Manchester.

Tom Clarke of the Enemy, celebrates 10 years of the Album “We live and die in these towns”. Having last year finally calling time on the Enemy, Tom Returns to the )2 Ritz in Manchester to play the entire album acoustically.

Support for the evening is front man of Starsailor, James Walsh, also providing an acoustic set of Strasailor songs, Standing alone on stage with only a couple of backlights, and acoustic guitar, in front of a near full house, could be a little daunting for some. Walsh treated us to a masterclass of how to strip back so many well known Starsailor hits and lay them bare. Walshe’s voice is so distinctive, it is easy to see where the Heart of Starsailor lies. Stand out tracks “Good souls”, “Silence is easy”, “Give up the ghost”, had the crowd in excellent form, the biggest sing back of the set was the superb “Alchoholic”, Walsh is so comfortable vocally and lyrically, on any other evening this would be the main act. If you get the chance catch Starsailor or if you are lucky as we are tonight catch Walsh doing an acoustic set.

Tom Clarke Front man of the now Defunked Enemy band has chosen to tour the bands critically acclaimed first album, “We,ll live and die in these towns”, which was released 10 years ago, Like Walsh earlier, this set is to be a stripped back version of the original.

Clarke appears in front a very warm and appreciative crowd that have now filled the venue.”Aggro” opens proceedings , then straight into” Away from here” and the rather splendid “Pressure”, it was delivered so powerfully yet had such a subtle undertone, that had the crowd bellowing every word.

If anyone thought for one minute this was going to be a nice little happy clapping strum along set, they don’t know Clarke, you probably have never seen the Enemy, either. Clarke delivers a totally different vibe acoustically, one that has you falling hook line and sinker into the moment, track after track, rewritten, to strip it back but musically directed to drag as much from the lyrical mastermind of Clarke.

“We,ll live and die in these towns”, takes its own direction, its one of those songs you launch into and let it find its own way, this Clarke does to perfection, ably supported by a crowd who have come out to let their hair down.

“40days and 40 nights” “This song” and “happy Birthday Jane” keep the album on track and the crowd in great voice.
Clarke explained to the crowd that from now on he won’t be charging for his music, anything he will release will be free, its getting people here he explains, seeing music live, having a good time. That’s what it’s about, I cannot disagree there.

As the set comes to a close with “This song is about you” , Clarke has delivered a great evenings entertainment, to deliver an album so many people grew up to, to rewrite it acoustically yet deliver it with a heart that is still beating at times pulsating……… Always in control. 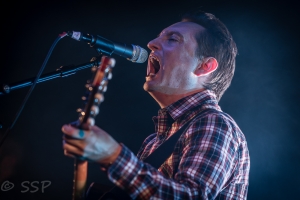