We first met Shader late 2017 at The Underground, Stoke and they blew us away!

We recently caught up with the bands front man Stu Whiston to get the low down and to find out whats coming up. 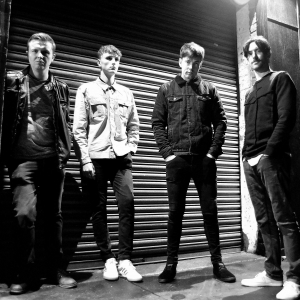 Obligatory, What’s the origin of the band’s name question?
We have a band whatsapp group and there were a few dodgy names flying about. Mike (lead guitar) sent a message saying Shader and we all thought it sounded ok. Could of easily ended up being Shaver or Shaker but luckily that one stuck.

When did you form the band and what inspired you to make music together?
Myself, Mike and Darren have being mates for years. Darren (bass) was my bro’s best mate at school and he lived round the corner from us as kids. I had a shitty bass guitar I used for demos in my bedroom and I caught him playing it one day. We started jamming Aneurism by Nirvana while my mum was downstairs actually having one from all the noise. That was that. I met Mike at music college. We both thought we were the biggest Oasis fan. He leant me about 15 live bootlegs that I didn’t even know existed and in return I taught him how to play the Columbia guitar riff. We started out playing in a covers band together and then went our separate ways to start other bands. Recently I was doing a solo thing that Mike and Darren got involved with. Issac (drums) was recommended by a friend of a friend and fitted into the chemistry of us three straight away. After a couple of gigs we decided to make it a brand new band.

How do you go about following up on such an outstanding track as your single Broken Minds?
We’ve just recorded the second single actually. It’s sounding pretty big and turns things up a few notches. There’s a few obvious singles we have in our set we could of put out next but this one just has something special. It’s a live favourite and will be one we can play in the festival environment that’ll get some feet tapping and some souls singing.

Are there any recurring main themes or topics for most of your songs, or are they all quite diverse?
I don’t really sit down with a topic in mind to be honest. I just mess about with melodies and lines and sentences normally come from that. Broken Minds was an example of a lyric that just jumped out and everything else kind of worked around that. I think there’s an element of confrontation and struggle in there for sure but an overall sense of hope and joy. The chorus is the pay off and the melodies are what really connect I think. All my favourite songs are about the melody first.

Paint a picture for us before a gig, what is it generally like for you all?
The last few gigs the main thing we’ve been doing is trying to keep warm. Some of the venues we’ve played in up until the point you go on stage, we’ve been fucking freezing. We’re pretty calm before we go on to be honest.

What has been your biggest challenge as a band? Have you been able to overcome that challenge?
I think being in a band is the hardest challenge. We sacrifice quite a lot in order to make the time to do it, so every time we get on stage and play a gig together we’ve succeeded I think.

Upcoming releases and gigs? Yes, the next single is set for release mid-April.