The  Leeds and Reading 2019 line-up is one of the most appealing and broadest in years.

There has been an intensified excitement, early on, meaning lots of ticket options selling out well in advance of the bank holiday weekender.

Ice lollies, sun cream and shorts were the minimum survival requirements to keep cool throughout the wall to wall sunshine. Flick Of The Finger packed Katie Clare off to the Yorkshire, with a few cold ones, requesting a report back on some of her Leeds Festival 2019 highlights.

Arriving Friday afternoon does feel like you’ve some catching up to do; camps are already firmly established; glitter has been applied and you can hear a myriad of artists doing their thing. There are seven stages, gratifyingly well organised in terms of accessibility and proximity to each other. They’ll host almost every genre of music from rock, dance, indie, grime, plus a whole raft of musical wonders; its a mind scrabble just deciding where to start. 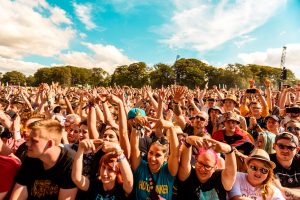 The Pit stage offers a trifactor of delights this Friday. Starting with Palaye Royale’s Leeds Festival debut. With the wildness that defines a Palaye Royale performance, the band hit the stage covering The Stooges I Wanna Be Your Dog. Competent as the cover maybe is it is when the band knock out their own tracks Don’t Feel Quite Right, Get Higher and You’ll Be Fine that they really explode. Sebastion works the barrier while Remington goes over it into the crowd: the entire band not allowing the audience to take a breath as they keep the energy at a peak throughout the set.

It has been 6 years since I last managed to catch Fidlar live. Their performance today has me cursing this lack of Fildar in my life. The LA quartet inventively sculpts wittily tinged garage pop-punk; crammed full of creative melody and lyrical ingenuity. The set is a mix of tracks from their album catalogue. The audience finding real joy and the need to sing along during 5 to 9, Cheap Beer and No Waves from their eponymous debut.

Watching Enter Shikari live is always an empowering experience: more so the smaller the venue. This weekend has seen them perform on both the Main Stage and headlining The Pit. Both the tent and stage are packed with activity. Whether bassist Chris Batten and guitarist Rory Clewlow are dodging flame throwers, Rob Rolfe is climbing his drum kit or singer Rou Renyolds is ascending the stage rigging or dancing with jubilant abandon: There is always something going on. Enter Shikari certainly like to keep us on our toes when it comes to their sets. Blindsiding us with the live debut of Tribalism; a track some of us have waited over a decade to hear. Once again heart-shattering perfection from the St Albarn’s quartet. 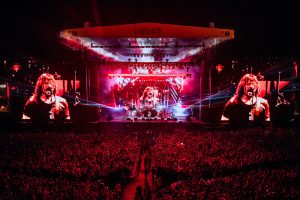 Foo Fighters know how to headline a festival. While they do indulge in some standard rock n roll tropes: call and response, singalongs and that now quintessential dragging an audience member on stage, they do so with a sparky spirit and tongues firmly in cheek. The beautifulness of unscripted randomness takes place from the start. As a powered paraglider swoops around the stage during Learning to Fly; Dave Grohl pointing this out with genuine surprise and delight.

As the sun sets the Foo’s run through hit after hit: Run, The Sky Is a Neighborhood, Times Like These and Monkey Wrench. Grohl’s teenage daughter Violet, first assisting the backing singers, heads front and centre for a powerful duet of My Hero. Both emotional, humorous and even though in front of an audience of more than 60,000 it feels intimate and special. As the bands last their last note rings out. The sky is filled with colour and explosions of some huge fireworks, which while stunning, still pale in compassion to the Foo’s amazing performance.

Is a supergroup a project propelled by vanity? Should they be approached as something less than the sum of its parts? Mini Mansions a trio made up of Queens of the Stone Age’s Michael Shuman, The Last Shadow Puppets’ Zach Dawes and Arctic Monkey’s Tyler Parkford’s. While each of the artist unique personalities is in evidence it is hard not to hear the Arctic-ification throughout their synth waved gritty rock. The band’s latest releases a swing slightly in a mainstream direction and this has added further depth with their newer tracks Bad Things (That Make You Feel Good) and I’m in Love sounding great live.

The sonic creations of Puppy fill The Pit stage tent from the start. Their sensational riffs and bold melodies a powerful statement and perfect for a summer evening. Their set is full of cynical wit that gives Puppy an approachable affability. However, don’t get this wrong Puppy are no joke with the electric combination of heavy rock riffs, alt-metal rhythms and the emotive catchy lyrics.

Catching only the last couple tracks of Do Nothing’s set on the BBC Music Introducing Stage. I’m instantly enthralled with their tense post-punk darkwave vibe, fortified by distinctive lyricism and gripping stage presence. Do Nothing couldn’t have done more to make their presence felt and create a compelling need to know more about them and their music.

London’s punk-rock gang Counterfeit does a perfect job of blowing away our silent disco hangovers with a ton of energy and discernible appetite for performing the music they make. While, you can hear dozens of influences peppered throughout tracks like Lack of Oxygen and Paralyzed, two of the strongest in the set. Frontman Jamie Campbell Bower’s authentically intense honest vocals lift everything above the standard. 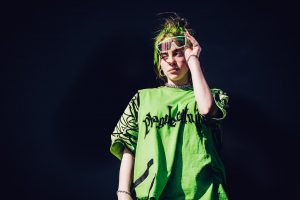 It has been a long time since the distorted lines of pop music has seen someone as invigorating as Billie Eilish. With aesthetics so slick they boarder on contrived, hower, it is a clearly a 100% candid Eilish that stands on stage.  Commanding the audience’s attention throughout with music and lyrics she created with confidence and defiance. Dipping into unsettling dark trip-hop, stormy melancholy as well as a spooky ethereal alt-pop. Elish ultimately creating a wealth of explosive dance-floor bangers that have the whole Leeds audience bouncing.

A fun set that works incredibly well, with, my strange addiction, idontwannabeyouanymore and all the good girls go to hell bringing a sense of challenge and depth to the pop sensibilities. Pulling hard on our emotions, as well as getting the 60,000 strong audiences to live the experience without a screen for once, when the party’s, brought forth tears for many. Its anguish and poignancy not even slightly diluted by the huge stage or blinding sunshine. Eilish is a dexterous, charismatic and prismatic star who delivered a performance that’ll be recalled as skilful, distinctive and exceptional for years to come.

As the stage light increases, Josh Dun, his face concealed in a ski mask, take the front stage a flaming torch held aloft. The crowd many of whom has stood throughout the entire day under a blazing sun caring nothing for the still superheated air or the sunburn scream approval for Twenty One Pilots arrival. Tyler Joseph stands on the roof of a burnt-out sedan the flames dance around his body throughout Jumpsuit. For two guys they manage to fill the huge Leeds Festival Main Stage with drama, emotion and stunning visuals. Heathens, Lane Boy and Stressed Out precede an Oasis cover, Don’t Look Back in Anger, with Post Malone (with guitar) joining Joseph on the piano for a rendition of the popular anthem.

Ride, Car Radio and Chlorine continuing to deliver emotional highs, keeping hearts pounding and the audience jumping. Dun and Tyler heading into the audience, taking to individual platforms during their finale, Trees, to thump out the beat on large drums. Confetti and smoke cannons exploding behind them showering the crowd with yellow and grey paper rain as their set concludes. 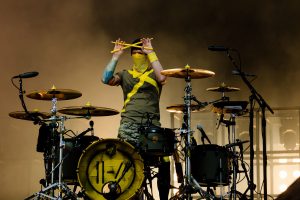