Halestorm made a triumphant return to the UK, playing four dates throughout the UK this past week.

I find it hard to comprehend why they haven’t made it bigger in the UK, but tonight a hardcore throng of fan have descended on Cardiff’s ‘Motorpoint Arena’.

For this tour the band are joined by two other American support bands, New Years Day and In this Moment, both hailing from California. 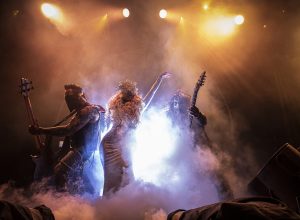 In This Moment © Sam Holt

But for many they had come to see Halestorm a band formed over twenty years ago by Lzzy Hale and her brother Arejay, over time they went on to sign to Atlantic Records and to date have released four studio albums, the last of which Victoriouswas released last year.

Opening the set with Black Vultures, they played a blinding set that had their audience captivated for close on two hours. Lzzy Hale has such huge stage presence, talking to the audience in between songs telling the audience how proud she is to be a musician, what is like to be a woman in the music industry and what the rock show means to her, and why her family of freaks are so important.

As a long time fan told me: Lzzy commands such stage presence that you cannot keep your eyes off her. No costume changes, no huge stage effects, just her powerful voice which can switch from screaming rock goddess to ballad singing diva in the blink of an eye. She also didn’t steal the spotlight and left the band to show off their equal talents.

I have to agree, and each member of the band played their solo’s, be it Joe’s searing guitar work, josh’s bright punchy bass solo. The one that stood out was Arejays drum solo that injected a little of the comedy factor, not only was his drum stool ‘hijacked’? He ended up playing a solo with the drummers from the other bands too, I did love those comedy sized sticks, I wonder where they came from?

Although many other songs were played, I was taken by I am the fire, a very strong way to end the set or was it?  For an encore Lzzy came back and performed an acoustic version of Rock Show / White Dress / Dear Daughter / Someone Like You, As Lzzy sang I’m not your girlin the white dress, I’m not your fairytale princess, it resonated how powerful her solo stint was, before being joined by the rest of the band for a rousing version of the anthemic Here’s to Us and perhaps the one I’d been looking forward to,  I Miss The Misery.

End result of the night for many Hoarse voices from the singing, sore hands from clapping, but none of that mattered as it had been a fantastic gig. Here’s looking forward to the next Halestorm gig!

Posted by
Sam Holt
This author has not yet filled in any details.
So far the author has created 560 blog entries.