Live: The S.L.P Live In Manchester

Playing the album in it’s entirety, without Kasabian material may have been a bit of a stab in the dark, but it paid off. Big time.

I was kind of expecting Serge to hold back on his performance, as this solo project is more toned down musically compared to the material he releases with Kasabian, but if anything, he delivered an equally strong performance. There isn’t an inch of the stage that he didn’t cover, and he even ventured onto the balcony above at one point, making fans go wild. They could hear him, but nobody could find him, until he just appeared seemingly from nowhere to have a walk around the fans sat around the edges of the stunning venue.

Serge came on to the opening track of the new album, ‘Meanwhile… In Genova”, which was to be expected. It’s without a vocal track, but is more than enough to get the eager fans roaring, ready for the next hour or so of incredible music on a truly unforgettable night. He then spent half of the second song as a shadow, hidden in a metal frame behind the mesh screens which had just displayed some of the best live visuals I have ever witnessed. Doing this just teased the fans, and the almighty roar which was let out when Serge finally emerged from behind the screens was probably the most excited I’ve ever heard fans.

The set then continued to deliver the new material which was released last week, with a carefully planned out set-list. Every few songs, there would be one of the anthemic tunes of the album, but in between, the more laid back, intimate material. Not only did this bring out the best in the fans, but it brought out the best in The S.L.P, allowing him to have a bit of a rest before he began to jump about stage, confetti cannon in hand, like the lunatic that everyone knows and loves. 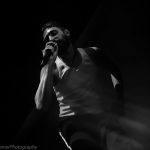 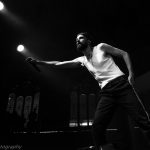 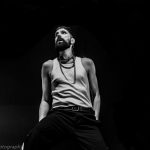 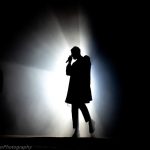 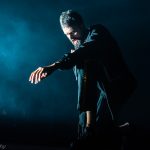 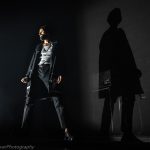 The mix of those visuals, with the incredible songs which Serge belted out, were a match made in heaven. Showing clips of music, and promo vids, before the song kicked in was a good way to get that crowd pumped up, as they knew what was coming next, and Serge knew they were ready for it. He wasn’t one for socialising with the crowds much, but this was his form of communication, and he did it excellently.

Getting to see someone who usually sells out arenas as part of a bigger band, play in a much smaller venue, holding just less than 2000 people, is a really special thing to see. Artists such as Serge make it that little bit more special, as he still delivers an incredibly energetic performance as if he was down the road in Manchester Arena. I’m just hungry for more now.