It has always been particularly enchanting that Puppy don’t fit any pre-set moulds. After all what they create with Jock Norton‘s wistful vocals huge guitar riffs and Billy Howard‘s immaculately colossal drumming is just so damn seductive. Starting their set with Black Hold sets the tone for what’s to follow.

With a mix of tracks from Goat and their latest release iii Puppy keep a perfect ebb and flow to the night. Bathe In Blood with its reservoir of hard riffs and fuzzy undercurrents keep the ready to mosh audience interacting and attentive. Numerous discerning layers of melody, clean pop tinged guitar sweeps, and metal churn are in abundance throughout Puppy’s set. Such as, the discreetly pop rock harmony of World Stands Still swelling to a satisfying conclusion for all.

When an eleven song set flies by in a snap you can not help but wish for more. In this case another eleven track wouldn’t have been at all objectionable. Puppy once again delivering a truly enriching experience.

Co-headliners on this tour, with Puppy, are Norway’s Bokassa who from the start set the mood for their half of the evening as fun, fast and furious. I don’t know the songs well but the crowd awash with Bokassa t-shirts do and their pleasure is extremely compelling.

Bokassa confidently delivering a more classic metal tinged rock n roll flavour than expected. Punching out dynamic laden riff followed by yet another dynamic laden riff. Vocalist and guitarist Jørn Kaarstad parts with his lyrics with conviction and engages humorously with the audience throughout. While bassist Bård Linga gets right into the thick of things, leaving the stage on multiple occasions, exhilarating the moshers tenfold. 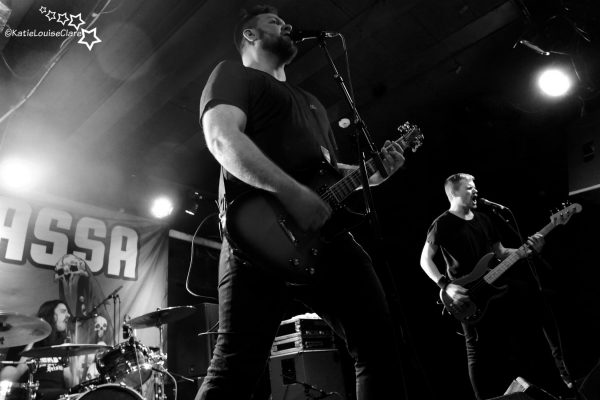 We’re nearing the end of the set and while there hasn’t been anything really adventurous, aside a dash of punky thrash, to stir things up here and there. What is presented – is done skillfully and via a live performance full of energy awash with affability. It’s genuinely impossible not be endeared by Bokassa. Old fans of Bokassa leave satisfied and elated. While, those new to Bokassa exit at least content and intrigued.