Freddie Mercury To Be Honoured

Legendary Queen vocalist Freddie Mercury is to be honoured with a commemorative Blue Plaque at his West London home, it has been announced this week (24 February).

The Queen star had a London residence in Feltham, west London, and is among the list of celebrities and famous contributors to culture that are to be honoured with the Blue Plaque.

According to The Guardian, the rockstar – who died of AIDS in 1991 – joins a list of good and great inductees, including Hollywood legend Ava Gardner, Elizabeth David, ballet dancer Margot Fonteyn, the comedic magician Tommy Cooper, and footballers Bobby Moore and Laurie Cunningham will also get Plaques this year, it was announced.

The scheme has seen more than 900 plaques installed across the UK, with the scheme started by London County Council and taken over by English Heritage. A special anniversary weekend will be held over 7-8 May, and an app is being developed which will guide people to the abodes of Mary Shelley, Ian Fleming and Mozart.

Recently it was announced that the long-planned biopic of Freddie Mercury looks to be back on track.

Ben Whishaw is said to remain in contention to portray the late Queen frontman and The Theory Of Everything screenwriter Anthony McCarten has reportedly been hired to rewrite the existing script by Peter Morgan (The Queen, Frost/Nixon). 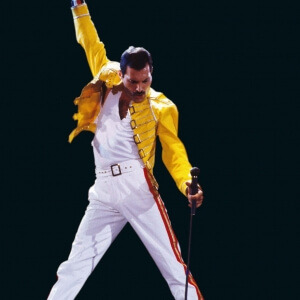 Shooting is due to start in June, The Tracking Board reports, with Scrotal Recall‘s Johnny Flynn in line to play Roger Taylor and Gemma Arterton attached to play Mercury’s former girlfriend Mary Austin.

The Mercury biopic has been in the works for over five years, with Sacha Baron Cohen originally attached to star as the iconic rock singer. However, the Borat actor dropped out in July 2013 due to apparent “creative differences” with Brian May and Roger Taylor, who are serving as executive producers on the project.

Dexter Fletcher (Sunshine On Leith, Wild Bill) was set to direct the biopic at one point, but he left the project in March 2014. A new director has yet to be announced.