EP REVIEW: ‘Ours For The Taking… Theirs For The Breaking’ by Air Drawn Dagger

So, here’s yet another young female fronted band with short, energetic punk-rock songs, desperately hoping to stand out from the crowd of wannabes. 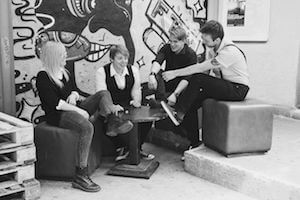 The good news, I’m pleased to say, is that they do stand out, in spades. Ladies and gentlemen, I give you Air Drawn Dagger.

Their debut EP, Ours For The Taking … Theirs For The Breaking, comes in the form of three rip-roaring tracks, that not only have the freshness to hook and pull you on in, they possess the quality that sounds vastly mature beyond their years, in that oh-so-familiar way, as if they have been around for far longer than they have been.

The opening track, Ours For The Taking, sets the pace and general vibe. On first listen, you could perhaps be forgiven for instantly thinking of the obvious Paramore connections, yet the Sheffield fourpiece’s sound quickly develops beyond the boundaries of the aforementioned.

Then comes, Theirs For The Breaking, with infectious playing from lead guitarist Sam Wagner. In short, the song is a near-perfect three-minute pop-rock song, that is guaranteed to have you nodding your head along to the beat during the very first listen.

The Banshee is the longest track, clocking in at four and a half minutes long, wrapping up the EP nicely. The warm, wailing vocals of lead singer Masie Manterfield hypnotically glide over the slower breakdown moments during the track, giving it a different feel to the previous two offerings. Personally, this stands out impressively amongst the trio, capable of being a strong lead single.

With a little nurturing, time and luck, Air Drawn Dagger will hopefully aspire to greater things in the future.