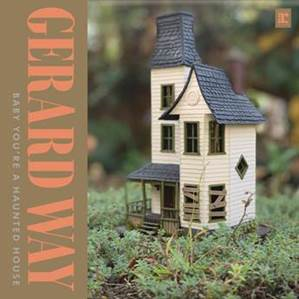 Gerard Way has released his first new solo material in three years with a musical commemoration to the spookiest season with the single Baby You’re a Haunted House via Reprise Records.

Way has been teasing, via his social media, that he was working on new music for some time. Finally, the wait is over. So, regardless if you’ll be enjoying a Happy Halloween, observing All Souls’ Day or taking part in Día de Los Muertos you now have an exciting new track from Gerard Way to play as you do.

Speaking of the release Way explained “Hey all! I wrote a song called Baby You’re a Haunted House about all our inner ghosts and demons and what it feels like being in love and having to deal with your own internal horror show.” Something, probably everyone can relate to.

Way continues “I tried not to really overthink it too much as I really wanted to start getting music out into the world again and sharing my art. The haunted house (the art work used for the single) was built by a model maker named Damien Webb and it kind of inspired me to put the song out for Halloween, as it seemed fitting with the holiday. I hope you enjoy the song. It was a lot of fun to make and features my brother Mikey Way on bass, Tom Rasulo on drums, guitar and vocals by me, an additional guitar by Ian Fowles (and) recorded by Doug McKean.”

Don’t think Way’s has not been resting on his creative laurels these past few years. His concentration has been directed firmly on his comic publications and producing his Umbrella Academy series to Netflix. The television show centers on a dispersed group of superheroes reuniting after their adoptive father, who trained them to save the world, dies. The series debut is set for transmission next year.

Baby You’re a Haunted House, is an amiable harmonization of fuzzy pop and 90’s indie anthems. The track would have fitted in well on Way’s 2014’s debut solo Hesitant Alien. A follow up to Hesitant Alien, might just be a rumor now, but it is one we hope becomes a reality: until then you’ll find us absorbing Baby You’re A Haunted House several times a day.

Keep up to date with Gerard Way via his official website and Facebook. Gerard Way is also active on Twitter from where he tweets as @gerardway.