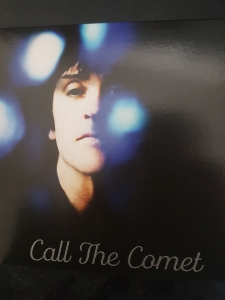 There is an old myth/cliche/belief in music that the third album is always the most difficult.

Considering that Johnny Marr’s third album with The Smiths was The Queen Is Dead, he does have a head start on others on how to break that taboo.

Fast forward 32 years later, and it’s the third album from Marr’s solo odyssey, Call The Comet. So how does it fare? The album opens with Rise, a foot stomping, keyboard and guitar driven number, with Marr rasping every word. Second song up is The Tracers, the first single release, and harks back to The Queen Is Dead in vintage Marr style, complete with one or two Woo-Woo chants for good measure.

Hey Angel is the third song and it brings the drumming of Jack Mitchell, the bass of Iwan Gronow and the able bodied guitar support of James Doviak, completely to the fore on this number. A brand new fan favourite comes in the shape of Hi, Hello. A real beaut of a composition, and is definitely one of Marr’s best solo songs. New Dominions is a very electronic, almost new romantic, based song, and it wouldn’t have looked out of place alongside the likes of Visage and Japan in their heyday. Day In, Day Out sees Marr and co break out the acoustic guitar to go with the trademark sound that has been long associated with Marr, and it’s one song that you’ll have to practice when you see him live, as you can’t help but sing along. Stand out song is Walk Into The Sea, a hauntingly wonderful piece of music.

This needs more than one listen for you to fully appreciate the capabilities of what these guys can do in the studio. Bug is the eighth offering, and will be a proper live favourite, thanks to it being a catchy number all the way through. Actor Attractor is one that brings in the keyboards and the guitar foot pedals together, a How Soon Is Now? for the modern age. The song that just narrowly missed out on as the standout song, but is still a superb piece, is Spiral Cities. A slick, groovy number that entices you in from beginning to end. My Eternal is a real 80’s sounding song, you could almost mistake what year you’re living in when this plays, but is a proper up to date sound at the same time.

The albums closing number is A Different Gun, and finishes off Call The Comet in subtle style. You can feel the progress Marr has made since The Messenger and Playland in this album and, like a fine wine, he will get better with age. Difficult third album? Not for Johnny Marr, it isn’t.

About the Author: Mark Sharpley

Greetings! The name is Mark, born in Macclesfield and now exiled in Colchester. I love music, just as long as it's groovy. My favourite band? The Smiths

Posted by
Mark Sharpley
Greetings! The name is Mark, born in Macclesfield and now exiled in Colchester. I love music, just as long as it's groovy. My favourite band? The Smiths