As It Is: Ben Langford-Biss Exits With Final Tour

Brighton pop-punks As It Is have announced a run of UK and European dates under the tour name Ben Today, Gone Tomorrow, this November. The announcement comes along with the news that this will be final tour for founding member and guitarist Ben Langford-Biss.

“Dear friends and fans,” writes Langford-Biss in an open letter “I have made the difficult decision to step away from As It Is. Before anything else, I would like to thank the other four boys in their support and understanding of my decision. They are still my brothers, best friends and I will cherish always the memories we made together. ”

Continuing an open a clearly heartfelt explanation “I am incredibly grateful and proud of everything we have achieved and created together, and for everything you, the fans, have allowed us, however, it is time for me to pursue other paths and projects in my life. Three albums and years of relentless touring takes its toll and has brought me and those closest to me to breaking point a number of times.”

Going deeper into teh reasons for his leaving the band Langford-Biss explains “This was by no means an easy decision to make having dedicated my life into it for almost eight years, but as the years have gone by my own ability and passion to live the life that comes with the music has waned. I will be doing one last tour in November with the boys in the kind of venues we cut our teeth in to say goodbye properly and have one last week or so playing music with my best friends. I am excited to see what As It Is do next and will be constantly supporting from the side-lines (hell, maybe they’ll still let me, guest, when I undoubtedly ask for a guest list spot to a show). I will most likely post a longer more candid, written piece at some point but for now, thanks for the memories, see you in November. BLB.”

The news came as a shock to fans taking to social media to share not only their best wishes but also their memories including Sarah Norton tweeting as @sarah_jeanne98 shared “Thank you for everything and I hope for the very best for you in the future. It was an honor [sic] to meet AND hear you play back in 2017. I wish I could have told you how much the band means to me, but alas, I was too nervous” 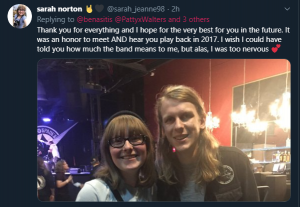 While Josh // GUNNERSVILLE TODAY who tweets as @Fellj01 tweeted “Thanks for the memories, @benasitis. We’ve had some deep and meaningful chats over the years and I can’t thank you enough for how much you’ve helped me through those dark times, with the energy you brought, you will be missed. I wish you all the best and will see ya on tour.” 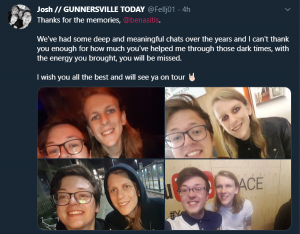 As It Is lead singer Patty Walters commenting on the news also shared his thoughts on Twitter, tweeting as PATTY | /\\\ | 狂88 via @PattyxWalters shared “we’ve been everywhere together, through every high and every low . he has more of my love and respect than he probably knows. so yes, blb is stepping down, but not before one final tour: eleven shows, thousands of you, and, for what might be the last time, five of us.”

The dates and venues for the Ben Today, Gone Tomorrow As It Is tour are as follows:

Tickets go on sale Wednesday, September 11 from a variety of retailers including See Tickets. 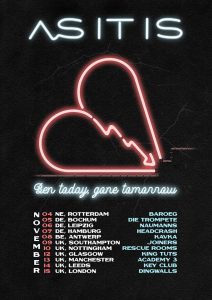