The surprise single called, King, is due for release this Friday 20 September through Rise Records/BMG. The track was named, by Annie Mac, as the Radio 1 Hottest Record In The World: news that is not a surprise to Black Peaks fans.

The sensational Brighton four-piece return, after a break due to health issues, with the new single produced by Mark Roberts who produced Black Peaks debut album Statues. The track is the bands first new material in almost a year since the 2018 sophomore album All That Divides.

King is a song about reflection, struggle and strength. It’s about showing vision and optimism in times of hardship and the journey through those times, all told through the story of a young boy and his father, and their walk through a forest after being separated in the snow.

Black Peaks frontman and vocalist Will Gardner explains “We had been working on a load of new song ideas, and this particular piece of music (which became King) was just a track that seemed to smoothly be completed really early on, musically at least if not vocally. Unfortunately, this time coincided with myself getting very ill, making it pretty much impossible to do anything at all, let alone write, practice, record and sing, so the track stayed unfinished for ages.”

Gardner continues “However, we had a really really amazing moment in July when everything just came together. I had this night when I couldn’t sleep and the chorus melody was just going round and round my head. I sat at my desk in the morning and the whole song just came out in one go, in like 2 hours of writing! I called Joe (Gosney, Black Peaks guitarist) and he drove over immediately, excited and a bit bewildered that I was so hyped on apparently finishing the song, I gathered enough strength to sing it through and record it, and it was done! To have been able to create a piece of music in such a difficult time has been one of the most challenging but rewarding things I’ve ever done and I’m so proud of what we as a band have made.”

Black Peaks are touring the UK and Europe from the end of September through October, with their London show at The Electric Ballroom being their biggest ever headline show to date. It is fair to expect King to be given its first airing on these dates, as well we’re told other surprises.

Support on all dates will be the incredible Black Futures and Bitch Falcon. 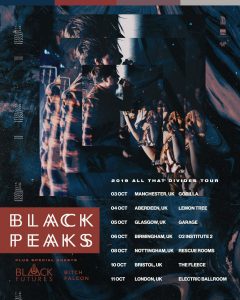