Bowling For Soup Like You’ve Never Heard Them Before!

Just in time for the holidays, Bowling For Soup present some of their greatest hits as you’ve never heard them before.

Long in the making, executed in a simple, stylish way, Bowling For Soup have teamed up with pianist Scott Simons to present “A Nice Night For An Evening”.

A double collection of some of their hit singles such as Almost, High School Never Ends, 1985 and Girl All The Bad Guys Want plus fan favourites like Life After Lisa, Hey Diane, Two Seater and more, all stripped back into piano arrangements for some pop punk, easy listening style.

Here’s Bowling For Soup’s main man Jaret Reddick on how A Nice Night For An Evening is something he’s wanted to do for a long time:

“This is an idea I have had forever. But one that I just didn’t know how to make happen. I mean, who would buy this, right?!?! All the BFS songs, easy listening style…and you can listen at work, in the nursery, or even at your wedding?!?! Ok..I would buy that! So I did! And now it is a reality for everyone to stream, buy, or whatever they are doing to get music these days! Two albums at once! Go get your chill on!”

Away from A Nice Night For An Evening, Bowling For Soup have been releasing a series of covers to celebrate their 25th anniversary as a band. The most recent cover, of Blue October’s HRSA is accompanied by a powerful video sending an important positive mental health message. Previous covers have included their take on the Eddie Money classic “Two Tickets To Paradise” and SUICIDE MACHINES’ hit “Sometimes I Don’t Mind”. BFS have also celebrated their quarter century with two huge US tours alongside Reel Big Fish and Less Than Jake respectively, appeared at the Warped Tour 25 Festival in New Jersey, and headlined The Lock Up Stage at Reading and Leeds Festival 2019. 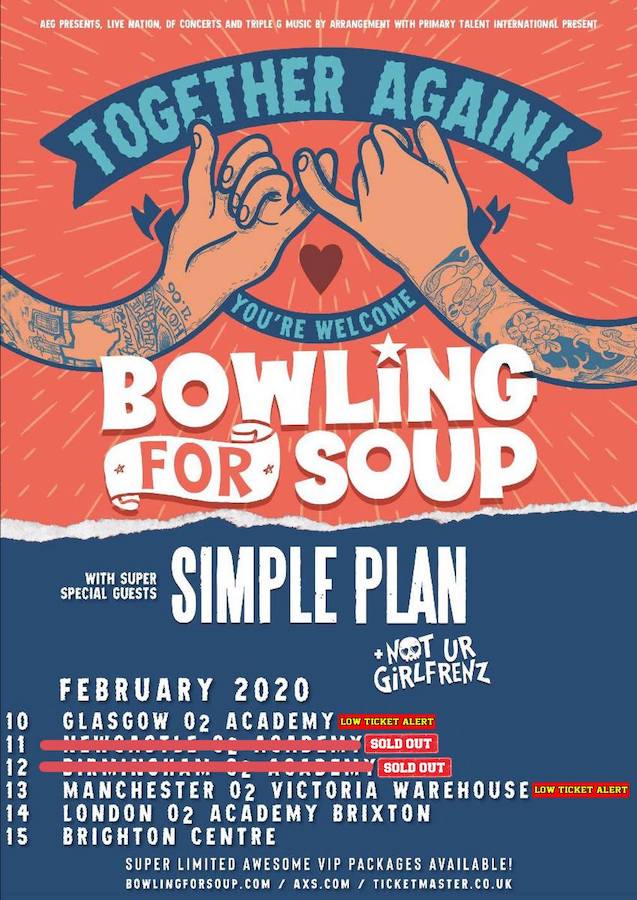 Tickets for their upcoming February ‘Together Again’ UK tour with Simple Plan and Not Ur Girlfrenz are on sale now, you can get them right now at here . Shows are selling out, with low ticket alerts issued for others, so get your tickets while you still can!