Still reeling from the news of My Chemical Romance returning. We packed a stunned Katie Clare off to London to cover a return that has also been awaited for with much anticipation. And considering the band’s fondness for dropping clues much deliberation too. One year on from Creeper’s on-stage announcement “Of all the shows we’ve played in this last four years, this one will remain with us the longest, because not only is it the last show of this album, but it’s the last show that we’ll ever do” what have the Southampton punks have up their sleeves.

It’s been one year since Creeper ceremoniously laid their Callous Heart emblazoned jackets at the front of the KOKO stage. They left a sold-out venue full of fans in genuine shock at what appeared to be: at worse a spit or at best a hiatus. We held on to the belief that it was the latter though plenty of naysayers were – well naysaying.

However, optimism it appeared, was triumphant. A simple hourglass emoji appeared on Creeper’s Twitter thread on 28 September 2019 started what we’d waited longingly for: the return of Creeper. But was it going to be the Creeper we knew and loved? Was it going to be Creeper at all?

November 01 2019 and the weather is grey and drizzly, the queue steadily growing outside Club 229, London, in contrast, is while (dressed predominantly in) black is animated with anticipation. Our tickets tell us we are here for a show by Fugitives Of Heaven, the 620-capacity venue selling out almost before any sustainable official hints were shared. I guess we’re in this together whatever happens.

A thick black curtain is pulled across the stage, we’ll not be seeing anything before … Creeper? Fugitives Of Heaven? Well, whoever wants us too. Anticipation hangs heavy in the air; chatter is prevalent as the excitement begins to peak. When fog glides from under the slither of space between the curtain and the stage: chatter turns to cheers as the curtains peel apart. 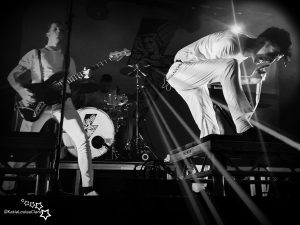 Luminous in white jeans, a variety of white shirts and tops: Ian Mills, Dan Bratton, Oliver Burdett, Hannah Greenwood and Sean Scott. Will Gould, centre stage is black-suited with white shirt, black tie and white microphone: the sharp side of 80’s new romantic elegance. Blasting immediately into VCR, the peppy punk rock tale of a haunting ex-love perhaps our maybe our own unrelenting introspection. Regardless, the audience is passionately immersed instantly. They’re back! They’re really really back!

Suzanne and The Honeymoon Suite follow and already we’re close to screaming ourselves voiceless. They’ve teased us with a new song and here is the reality. Born Cold a new track getting its debut outing. It is a thrilling darkwave, interpretation of classic rock: a bit glam, a bit art and a bit operatic. Sleek with an edge. Emotive yet packing a solid beat. If this is one of the routes Creeper plans to explore, we’ve got nothing but good things heading our way.

Hard to claim that Creeper take it up a level when they’re already soaring, but somehow, they do. Winona Forever, Black Mass, Darling for which Gould and Greenwood duet front and centre. Remaining on stage Greenwood and Miles deliver the heart-crushing country and western lament Crickets. We barely have time to wipe our tears as the band return, Will having changed to an all-white ensemble for a rapid successive of tracks: Black Rain, Poison Pens, Gloom and Down Below. Drawing a close to the main set with Misery: as always something of a therapeutic release. 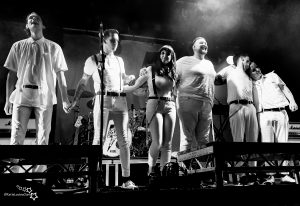 A swift two-track encore Hiding With Boys and a year on from its last outing, I Choose to Live, still truly an intense experience. Maybe now more powerful, more meaningful: a sentiment to embrace and never forget. Creeper gather together at the front of the stage holding hands they take a bow and exit waving. The next chapter for Creeper has begun for now all we can be sure about is anything can happen and you are not going to want to miss any of it.