We are celebrating today after hearing Pengshui’s announcement that they are going on tour. We really do recommend that you do not miss this incendiary live band as they hit up a number of UK venues later this year. Tickets go on sale Wednesday 31st July 2019.

Yassss, London grime, punk and metal fusers Pengshui are hitting the road with their distinct heavy sound and an engaging performance. The band have already captivated audience at a number of festival’s across the UK and Europe this summer. We know they’ll be doing the same on their own UK tour.

The band are also putting the final touches to their forthcoming debut album, while we await the release, we advise setting your alarms for tickets this Wednesday.

Tickets go on sale Wednesday, July 31st at 10am at LiveNation as well as other online retailers. Don’t forget Pengshui will also be taking BoomTown Festival by storm this August 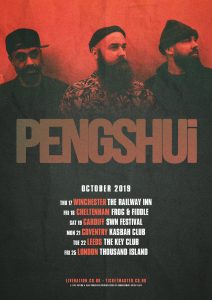