After much anticipation BROODERS can announce the line-up for RifFest #2, their annual celebration of all things fuzzy, scuzzy and buzzy, which will take place at LEEDS BELGRAVE MUSIC HALL on SATURDAY 25 JANUARY 2020.

Get your RifFest tickets here

In partnership this year with Superfriendz, BROODERS have been able to curate a ground shaking array of the biggest and the best on the scene at the moment and, with the most hectic expectations in mind, RifFest 2020 has a line-up not to be missed. 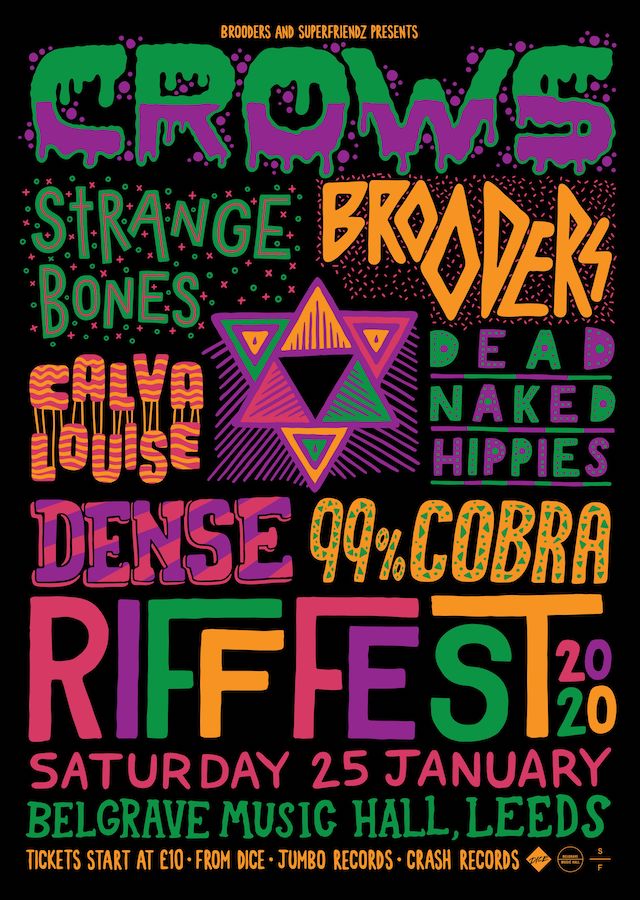 The festival this year is proud to host a wealth of talent from across the underground scene in the UK, with proceedings kicking off with heavy and chaotic light-heartedness from Hull riffers 99% COBRA. Following this controlled anarchy, we will be cradled into the caring embrace of Leeds’ almighty DENSE before being unsuspectingly thrown around by their garage rock-infused intensity.

Should you think things might calm down from there, you’d be very wrong. Making their mark once more on their home stomping ground, DEAD NAKED HIPPIES will be screaming, shouting and tearing through your eardrums like a force of nature. Then, keeping with the vein of hard hitting intensity, CALVA LOUISE will be next to grace the stage with their psych-infused, heart pounding, ear shaking riffs.

Hosts BROODERS will be up next and keen to deliver on their promise to astound Leeds with something spectacular. After a six-month absence from the live scene, despite a wealth of single releases, the band have been building serious anticipation for their return to their hometown. Expect the dangerous, high octane fierceness that has been dwindling since their hibernation to come back stronger than ever.

Penultimate to the headliners is something beyond the realms of intensity we’ve so far become exposed to. STRANGE BONES bring a ferocity like no other. With a reputation for live shows that resonate with genuine menace, no one can ever know what to expect from Blackpool’s punk influenced, road tested quartet. Out of the frying pan and into the pits, this is not one to be missed.

Finally, onto the headliners. Much like the creature they name themselves after, CROWS are as mysterious as they are threatening. With an edge of instability and uncertainty to their every breath, CROWS will venture from London to bring something huge to RIFFFEST #2. Ranging from reflective and melancholic to outright bone crushing intensity, they are a band that really do it all in the space of one all-consuming performance. Expect the unexpected and prepare for something out of this world.