Royal Blood are back, and after their last two albums, I cannot wait

The news came on their social media pages this morning, announcing a select number of dates and confirming work on what would be their third album

Royal Blood have been around a while, coming in and out of the woodwork to deliver their incredible music to the masses, and i’m positive that they will do exactly that with these upcoming dates, and they will definitely deliver with what will be their third studio album. Following on from their first two, number 1 albums, 2014’s self-titled debut, and the incredible ‘How Did We Get So Dark’ released in 2017. These two albums alone have gained the band some of the most prestigious awards that a band can get, including BRIT awards for; Best Live Band, Best New Band and British Group, alongside NME and Kerrang awards.

These dates will see them play much smaller venues than what you would expect from a band of their stature, but they will be beautifully intimate, and it seems to me as if they are warm up shows, for something much bigger. They are set to play; 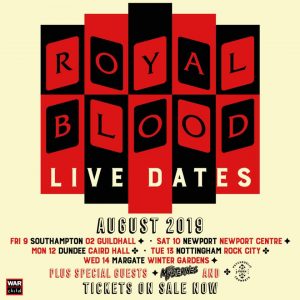 It’s rare to see a band of their calibre perform at such small, intimate venues, especially after their last tour saw them sell out Manchester Arena, and three sold out nights at London’s Alexandra Palace. The tour is not going to be one you want to miss out on, with Mike and Ben delivering their incredible noise to such a small crowd, and the probability of new music being thrown in to the mix. What more could you ask for?

Tickets for these shows are already on sale, so get them whilst you can. A portion of each ticket price will be donated to War Child UK, a charity which provides help, education and stands up for the rights of children effected by war.