If all the people who said they were at Spike Island, on that hazy Sunday night in 1990 were in fact there. The Stone Roses would have played to 128,000 people and not the 28,000 they did. This is however only part of the legacy of Sunset Sunday, the height of the third summer of love, a day that birthed a million stories no amount of reality could taint. It was a once in a lifetime event … or was it?

If you were too young, too far away or even too broke to have made your way to the Spike Island, Widnes. You’ll not have experienced the isolated field which neighbored suspiciously coloured tributaries and an ICI factory: not the only chemical supplier in the vicinity that weekend. You’ll also not have experienced what has become one of the most famous, era-defining events in music history.

Several years in the arranging and arriving in time for 30th anniversary of the illustrious show The Clone Roses announce Spike Island; The Resurrection.

Speaking about Spike Island The Resurrection, Baggy, the bassist for The Clones Roses explains “The prospect of performing on the exact same site as The Stone Roses played their now-legendary show is almost unbelievable. Growing up only a few miles from the original site on the Mersey estuary we were all brought up on the tales of that day. I’ll admit I was just a little too young to attend on the day but if you believe what folk say around here it appears there was closer to 330,000 rather than 30,000. We hope to give the veterans a nostalgic trip down memory lane as well as a chance for younger Roses fans to experience just some of the magic of that day 30 years ago.”

On the 16 May 2020, The Clone Roses, the UK’s No.1 The Stone Roses tribute band, will take to the stage on the infamous Widnes Island. This will be the only live performance to have been held at the site since that historic day back in 1990. Halton Borough Council leader Councilor Rob Polhill says, “Those in Halton and beyond – who still recount with enthusiasm their memories of 30 years ago – will be joined by many others who are excited at the prospect of recreating the legendary concert at Spike Island.” 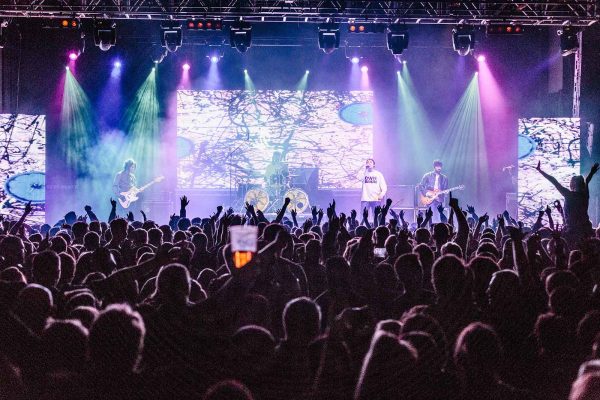 The Clone Roses are the longest-serving and the most successful Stone Roses tribute act in the UK. Roses fans have travelled far and often to immerse themselves in The Clone Roses expertly executed renditions of Waterfall, She Bangs the Drums and Made of Stone; to name just three. Even Stone Roses bassist Mani acknowledged them as “the second-best Stone Roses in the world”.

The Clone Roses have an unmatched reputation for their attention to detail from their lemon sporting drum kit, the track for track setlist and even that unique Roses swagger. Regularly performing at some of the UK’s best and biggest venues, The Clones have conquered the stages of Manchester Academy, Nottingham Rock City and Shepherd’s Bush Empire. However, in paying homage to all eras of The Stone Roses twisting career, it seems there is one defining moment is Roses history that eluded them, that is, until now.

The event will be a celebration not only the legendary gig but also the seminal music scene. Joining The Clone Roses will be a host of famous DJ’s and the cream of British tribute bands all making sure that the sounds and the spirit of the Madchester scene echo throughout the day. The Clone Roses have handpicked the tributes acts joining them on stage and the line-up includes Happy Mondaze, The Smiths Ltd and The James Experience. As well as amazing live music there will be DJ sets from Clint Boon, Happy Monday’s Bez and Dust Junkys rapper MC Tunes. Also making an appearance are Spike Island alumni Andy 808 State and Hacienda Legend Dave Booth. While Manchester DJ and radio host Dave Sweetmore will host the day’s events.

Spike Island; The Resurrection will take place on Saturday 16 May 2020. The event kicks off with access from 13:00 with the music beginning around 13:30 the event is due to finish around 22:30 pm. Tickets go on sale this Saturday (7 December 2019) from 10:00 am. Ticket links and much more can be found on Spike Island: The Resurrection official website.