BAD//DREEMS have released a brand new video for the track Cannonball, which can be found on their brilliant, recent album release Doomsday Ballet released through BMG.

The band also announced a headline UK tour starting in March 2020 as well as main support to DMA’s at Brixton Academy the same month.

“The original version of Cannonball was more along the lines of a Jesus and Mary Chain type song.” BAD//DREEMS explains “The key to how it ended up how it did was Burke (Burke Reid, Producer) coming up with the very counterintuitive groove. I also recall we were listening to Prince’s Purple Rain as a reference in the studio, for what it’s worth. What a masterpiece that song is! Ben knocked out the clip in a few hours with long time collaborator Tom Stevens in the iconic and much loved Bakehouse rehearsal studios in Melbourne.”

The band will kick off their 9-date UK/EU 2020 run in Brighton on March 12th playing London, Manchester, Glasgow, Birmingham, and Bristol – audiences they’re about to become well acquainted with whilst supporting The Chats on their November/December UK run kicking off next week. BAD//DREEMS will also debut their intense & electrifying live show in Rotterdam, Cologne and Paris.

The five-piece released their third album Doomsday Ballet on 18 October 2020. It has since received critical praise, including an Australian Music Prize nomination, US radio love from KEXP and numerous other college radio stations, a packet album feature on triple j and a packed out Australian album tour. Championed by the likes of Robert Forster (Go-Betweens), The Avalanches, Mark Opitz, Midnight Oil and others, the band recently put on a fundraiser for the Bush Fire Relief and raised over $200,000

Live wise, the band have toured extensively in Australia and abroad, appearing at Splendour in the Grass, Falls and Laneway festivals, and supporting acts such as At The Drive In, The Avalanches and Cold Chisel. Following their recent European and UK tour supporting The Chats, the band returned home to Australia to round off a massive year with performances at Best Night Ever on the Gold Coast, and National Falls Festival run. They have ALSO just announced an Australian headline tour for 2020.

BAD//DREEMS UK dates are as follows: 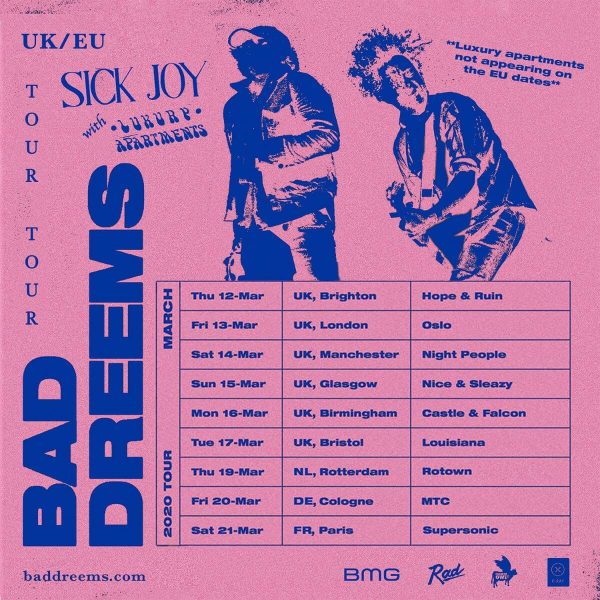