Thunderingly brilliant alternative rockers Lowlives have announced that they will be supporting pop metallers New Years Day on their upcoming UK and European tour which kicks off on 18 February 2020.

Seeing Lowlives live is a striking experience. They create a cohesive sound from a wealth of exciting genres. Punk rock, post-hardcore and even some old school grunge, bleeding together with a wayward agreeably.

“We’re stoked to announce we will be returning to the UK and Europe with our good friends New Years Day next month,” explains vocalist and guitarist Lee Downer. “We haven’t been back to the UK since we were there to do Reading and Leeds and shows with The Used in 2018, so we’re really excited to be going back…and also being a Brit living in the States, I can’t wait to finally get some proper fish and chips in me!”

The band will release their new single Hey You on 3 February 2020. The track was produced by Beau Burchell (Saosin, The Bronx).

Speaking about the track Lee says: “I wrote the main basics of the song really quickly one evening, I wasn’t having the greatest few weeks so the song was kinda like a pick me up, the verses are self explanatory, whiney whining woe is me. The chorus is basically telling myself that everything was going to be ok and to be grateful for what I have.” 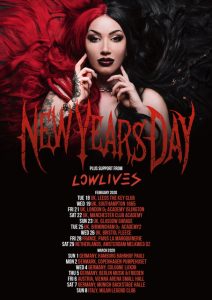