Enter Shikari dropped a new single, { The Dreamer’s Hotel }  last night, Premiering the tune on BBC Radio One the song was instantly Annie Mac’s Hottest Record In The World.

The excitement did not end there with news of the band’s sixth studio album, Nothing Is True & Everything Is Possible, due for release worldwide on Friday 17 April 2020 through So Recordings / Ambush Reality. This is Enter Shikari, right? So you know they had a further beautiful surprise in store for us.

Yes, Enter Shikari are going back on tour. Five dates all extremely intimate to launch the new album. The album launch tour starts off in Sheffield, stopping off in Glasgow, Liverpool, London and culminating in Bristol on Thursday 23 April 2020.

Ticket links will be made available only to those who preorder Nothing Is True & Everything Is Possible from the band’s website and members of the newly formed Future Historians fan club. The Future Historians fan club started in December 2019 and allows members access to a members Facebook group, access to limited merchandise as well as a monthly competition with a chance to win something special that money probably couldn’t buy.

Enter Shikari’s new album Nothing Is True & Everything Is Possible, the first to be produced by frontman Rou Reynolds and vinyl collectors are going to be in seventh heaven. Nothing Is True & Everything Is Possible preorders include an extensive variety of vinyl colourways in a number of limited availability. Other album formats include coloured cassettes, CD’s as well as test pressings, signed artwork and t-shirts. More information and all those pre-order bundles available now on Enter Shikari’s website.

Frontman Rou Reynolds talking about the band’s new musical creations explained “Looking at all we had achieved, gave us a better sense of perspective and confidence… What are we capable of? What is possible? These questions are part of Shikari’s DNA. But now we reflect a society where possibility itself has drifted from something of an optimistic opportunity to something quite frightening.”

{ The Dreamer’s Hotel } is one hell of a hefty banger. Thick with percussive that hammers you with catchy hooks and frantic energy-demanding you to move. We may have already done some ligament damage throwing ourselves about to { The Dreamer’s Hotel } but don’t take our word or injuries as gospel check out the new track for yourself:

Enter Shikari’s Nothing Is True & Everything Is Possible Album Release Tour is as follows: 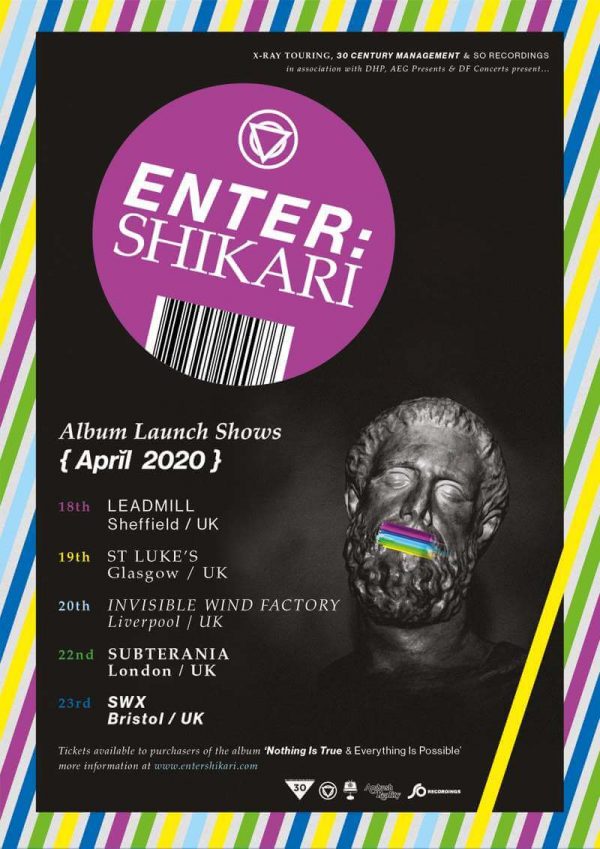