Nova Twins Release Video for Vortex Ahead of UK Tour

Nova Twins return with yet another punch-in-your-face-anthem, Vortex, which is released this Friday (September 13), arrives just ahead of the band’s UK tour which starts tomorrow in Southampton.

Vortex bobs and weaves with effortlessly cool, banging basslines and incredible guitar riffs: all of which were created with the Nova Twin’s vast pedal boards you’ll find no synths here.

Vortex follows on from the huge success of the Nova Twins previous single Devil’s Face. The track was chosen as Single Of The Week by John Kennedy at Radio X and received BBC Radio airplay too. The band turned heads during this summer’s busy festival season at Boomtown, Download, Hellfest as well as an incendiary set at this year’s Heavy Music Awards.

The strong and unique bass guitar of Georgia South and the incisive vocals of Amy Love, are the driving force of Nova Twins. Their releases showcasing their unique future-rave-rock sound that fuses bass-heavy grimey punk and lots of riotous energy. Nova Twins bassist Georgia South explains “When you’ve never seen yourself in music, there’s an opportunity to build something from nothing. To make tracks that don’t sound directly like anyone else’s. We had to work out our identities within music because we never had a reflection,”

The best friends have turned rock on its head, injecting their songs with boundless energy, barely controlled rage and heavy riffs: all the while dressed head-to-toe in designs they’ve created themselves. Nova Twins are above all, strong talented musicians using their platform to champion inclusivity and diversity with their high-octane, genre-warping sounds.

Friday, September 13 Brighton, The Hope and Ruin (Please note this date is SOLD OUT)

Nova Twins will be supported by The Pill & Telemarkk. Tickets available now via this link as available. Please consider Twickets as a second market option rather than secondary ticket sites that do not re-sell at face value. 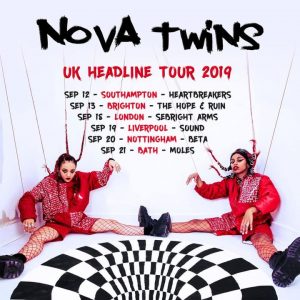