Following the announcement of Morrissey’s 13th studio album ‘I Am Not A Dog On A Chain’ in January, we’re please to announce that Flick of the Finger have 2 pairs of tickets to give away, for both the Leeds & London shows.

Produced by Grammy award winning producer Joe Chicarelli (Beck, Tori Amos, The Strokes, The Killers) and recorded at Studio La Fabrique in France, this latest instalment saw the album receive a great response from both fans and critics. 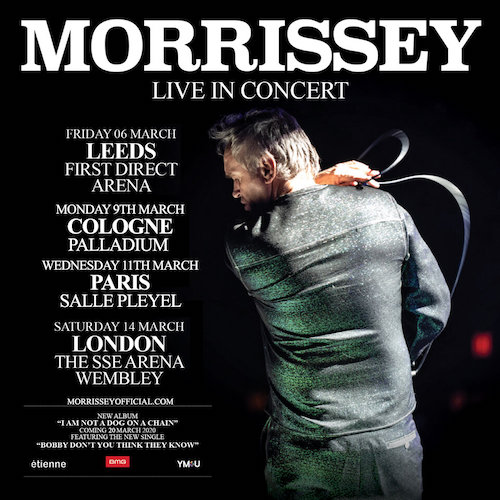 This new limited run of shows, set to kick off the launch of the ‘I Am Not A Dog On A Chain’ album, promise to be not-to-be missed affairs if reaction to Morrissey’s 2019 U.S. dates is any indication.

Press who covered the U.S. Autumn tour raved about the powerful performances as some of Morrissey’s best ever, while continually commenting on the strength of his “ageless” vocals.

We have 2 pairs of tickets to give away for the Leeds and London shows. To be in with a chance to Win Morrissey Tickets, simply answer the following question, leaving your comment below. Winners will be emailed 7 days before the show, so please ensure you enter the correct email.

Who produced Morrissey’s 13th Studio album? Along with your answer in the comments area below, please leave ‘Leeds’ or ‘London’ so we know which tickets you would like to win. Good Luck!